Down to the nuts and bolts 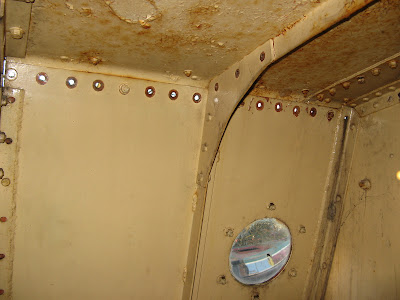 Today has been a very productive day. It started very early, when Tom arrived to finish shotblasting the hull - just the back end to do, after rain stopped play on Friday. This revealed some old, not very well executed repairs that will need to be redone, and more seriously, blew a couple of (very small) holes in the counter, each round a rivet in the guard iron. The damage here has been caused by rust behind the guard iron,which would have started forming as a result of the dents which the counter wears with pride. So a section will have to be replaced and the guard iron cut out and re-riveted. 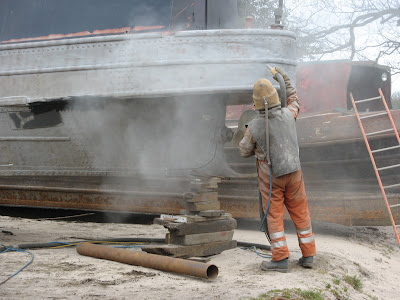 After that we had to get a first coat of blacking on before it rained, which we very nearly managed. Then we went off to visit Venables, the local timber merchants, to enquire about iroko for the gunnels. Yes, I have finally been persuaded against oak; not only does it apparently corrode the steel, rot and wear out, but it also doesn't stay straight. Now any or all of this may not be true, but it seems iroko is tried and tested and I haven't heard anyone say a bad ord about it. It's a shame not to have oak, but heart mustn't always rule head.

When we got back Dave was ring-welding some of the most worn rivets, to stop them pulling through the steel. We had some lunch, and then set about the main job of this trip - removing the (oh god Blossom, what shall I call it) top of the engine room so that the engine can come out. We'd been prepared for the worst with this, given that it hadn't been touched for decades, but with the exception of about half a dozen, all the bolts came out easily, and I got to use my new ratchet very effectively. Jim then also undid most of the bolts securing the engine and got some of the peripheral stuff out of the way. Then he took the floor plates out, as we will be removing the fuel tanks, for a good clean (apparently this is a suitable job for me), as well as the engine.

We considered that a good day's work and settled down for dinner cooked on the Epping - a new recipe, slow cooked spaghetti. Tastes indefinably different from the conventional fast cooked sort (i.e. a bit uncooked) but is undeniably soggy.
Posted by Sarah at 20:37