Clean round the bend 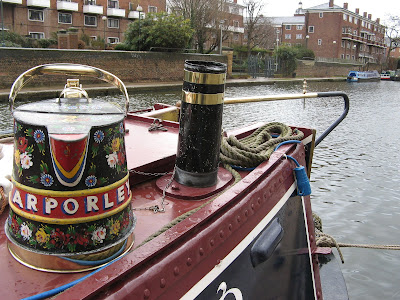 Saturday was my first outing really in charge of Tarporley. I've been out quite a few time since I 'qualified', sometimes nominally as 'skipper', but always with other 'qualified' and experienced people with me, to whom I would of course defer rather than having confidence in my own judgement.

It gradually began to dawn on me that this might not be the best idea. Many of these people - lovely as they are - have different ways of doing things, ways I might even consider to be, if not wrong, then not the best way. Certainly not the best way for me. I've been shown lots of different things by lots of different people, and there are some people's judgement I would trust, and whose instruction I would be prepared to take, far more than others - mainly on the basis of having seen them handling a boat, and also applying my common sense as to what are safe and unsafe practices (like where to stand when steering, for example). I would sooner learn from people who are handling working boats every day of their lives, than someone whose entire experience is as a volunteer on (mostly modern) community boats. But it tool me a while to work this out.

So on Saturday I was on my own - not literally, I had a good crew, and of course seven passengers - but in the sense that the buck stopped with me. I had the responsibility for whatever happened, but also the power to control it.

My biggest worry was getting round the turn by Cumberland Basin - a 90 degree blind bend coming out of a bridgehole. I had never successfully achieved it before, at the very least having to reverse and manoeuvre to get round. Whenever I had done it with anyone else, I had been told to wind the revs up (and on occasion had it done for me), and that that that was the only way of getting the steerage round the bend. The trouble with that, for me, is that I then find it a struggle to move the tiller, and I'm still moving forward faster than I'm turning. So this time I trusted my own judgement and took it really slowly, and got round beautifully. What a sense of achievement that was. And there were others - making a sharp turn (having got out of position) to make a perfect entry into a lock through one gate, holding the tiller out and having faith - or rather knowing, now that I am getting to know the boat - that it would get round in time. There was briefly that wonderful feeling of being at one with the boat.

Having the new, longer, tiller helped enormously too. It makes the difference, for me, between steering and not being able to steer. I took my duties seriously and arrived early enough not only to do all the engine checks and make sure the boat was clean and tidy, but to polish the brass too. And I was so glad I did when Andy, from Jason's Trip, popped up at Little Venice to say 'Glad to see the water can's in the right place for once'. There was one Waterbus out on Saturday, and Tarporley's brass was brighter than theirs!

I discovered towards the end of the trip that one of the crew was in fact very experienced and good at handling the boat. I think it's just as well that I didn't know at the start though, or I might have copped out and asked him to do the hard bits. And what I would have missed out on! The passengers were lovely too, and even gave me a little present, some lovely soaps from Camden Market, where we indulged them with an extra stop on the return journey. All the visitor moorings were full, but as one of the locks at Hampstead Road is currently out of use with the top gates chained open, we tied up in there for half an hour.

Even the heavy showers that interspersed the sunny spells had the decency to occur when we were in locks, giving me a chance to get my coat on!
Posted by Sarah at 12:06