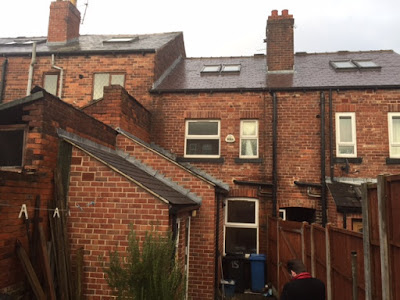 Well, I was meant to be writing a post about my house, but I've just spent half an hour reading old posts about it instead.

I am very lucky to have a house, and I love my house very much. The interesting thins (well, an interesting thing) is that this is, in at least one way, the house I always dreamed of, in that it has the staircase going crossways through the middle. There were a couple of houses in Haywards Heath when I was growing up that were like that - they had their 'front' doors in the side as well, and that was the sort of house that my adult self occupied in my childhood imagination.

My house, whilst being a largish example, is in layout a classic Sheffield byelaw terrace. This is in many respects different from a Sussex byelaw terrace. If you've not come across that term, well, neither had I until I moved to Sheffield, but as you might imagine, it was a delightful discovery.

The Public Health Act of 1875 required local authorities to bring in byelaws to regulate housebuilding. It stipulated what they were to achieve, but not the detail of how they were to achieve it. So, all new houses had to be built with an outside toilet. At first this would be an earth or 'pail' closet (which will need no explaining for boaters), and there had to be access for the night soil men to empty it.

Back in Sussex, the closet would be at the bottom of the garden; the terraces would be continuous and solid, and an alleyway would run all the way along the back of them. This sort of set up is pretty common in the north as well, I think, and you can place a person by what they call the alley (gennel, jinnel, etc.) In Sussex I don't recall it having a particular name; there is such a thing as a twitten, but that is a passageway between two (high) walls.

In Sheffield, however, the closet would be adjacent to the house, and accessed from the front, via a passageway every four houses - at a minimum. This meant that gardens or yards could back directly onto one another, with shared walls. My house is essentially part of a court, a square with terraces on all four sides facing outwards, and the gardens in the middle. On my street there's a passageway every two houses, which might be because it's on such a steep slope. A great benefit of that is that the gardens can be individually fenced off, whereas it's still very common here for byelaw terraces to have shared gardens, and for access to two of every four back doors to be across the neighbour's garden.The first floor flies over the passageway (I have a couple of lovely vaulted arches holding mine up) and each house gets half the space - so I have a massive front bedroom, while my next door neighbour's bigger room was at the back, which means they now have a more spacious bathroom than me.

When it was built, this house was a classic two up, two down, with a cellar (for coal), and attic, and an outside toilet. The front door opens directly into the front room - which is another difference from down south, where a separate hallway seems the norm, even though it results in a much smaller front room. Because the front door opens direct into your best room (and often, although not in my case, straight off the street) you don't use it. These days front doors are rarely used because the space is needed for furniture (or in my case, a giant rubber plant).

At some point, I assume in the 1960s, the council bought up a lot of the houses in my street. Most of them got sold again under Right to Buy in the 80s, although one remains as a council house. It was during that period though that the council put in indoor bathrooms, subdividing the upstairs back room, and built the kitchen extensions which are known as an 'offshot' (and which everywhere else seems to be called a tunnelback, although that might by definition be two storey). They also put Veluxes in the attic and possibly rerouted the attic stairs - I haven't quite got my head around that yet.