Yesterday we did make it to Hebden Bridge. By car. It took about an hour and a half. There were apparently thirty three boats there, although I don't think we saw that many. 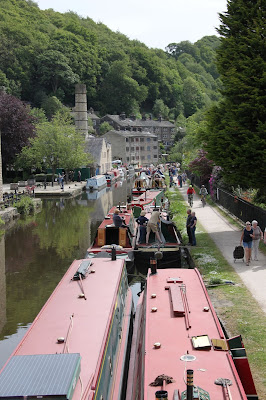 By most accounts, the journey there had been a real struggle, with very little water and vast amounts of rubbish. Competition for the worst thing on a prop seemed to have come down to a final between a mattress and a tennis net, that kept Marquis stationary for two days. I can't in all honesty say I'm sorry to have missed it. I love my boat, I love boating, and I love the canals, but I don't think I'm made of that stern stuff, sadly.

There were boars there that I hadn't seen before, because dsome of them don't make it south very often. And there was a large contingent of wooden boats. Here are Joel and Maria: 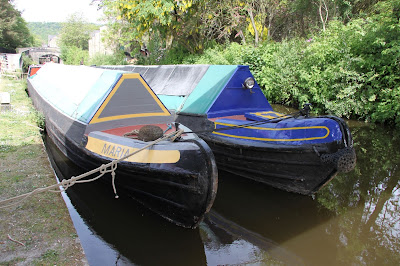 Daphne (with Swan, immaculate as always, on the outside): 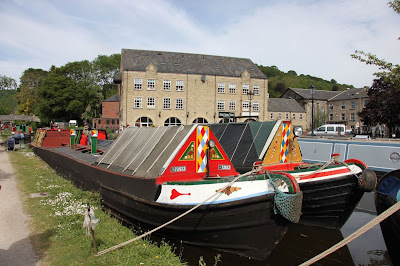 And Hazel and Forget-Me-Not from the wooden canal boat society: 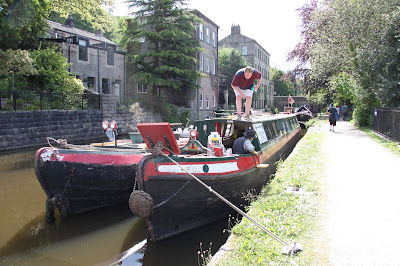 Chris told me that when he bought Forget-Me-Not in 1977, for £25, Chertsey was engaged to tow her from Chester to Ellesmere Port - but Chertsey broke down en route and he ended up bowhauling them both. 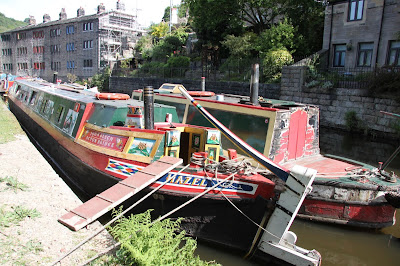 The scenery was stunning - I'd been to Hebden Bridge before but Jim was suitable impressed by the houses clinging on to the impossibly steep hillsides above the town (not featured in this scenic photo). 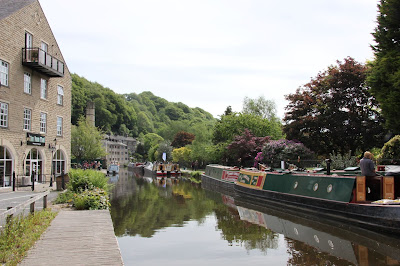 It all felt fairly low key, but we were there quite early (just as well, as it turned chilly later and was thinking about raining as we left). There were a few stands in the park, which was very pleasantly and handily adjacent to the canal. There was fizz and nibbles, in which we were very generously (given that we hadn't made any effort or suffered and hardships to be there) when a rather low key local mayor popped along to do a low key formal opening.

Jim and I wondered around the town, which itself seemed a bit subdued. Evidence of flood protection measures is everywhere, from the building of a big new wall along the riverside, to each shop's individual doorway flood gate. Last time I was here was before the devastating floods of Christmas 2015 had happened. We did a bit of charity shopping and then set off for a walk along the towpath, but didn't get far before deciding to turn back - the path was just a bit narrow with the dogs and growing numbers of pedestrians and cyclists. Ricky and Geoffrey lapped up loads of attention, as each of us waited outside a shop while the other had a rummage.

We ended up for lunch in a painfully hip craft beer bar (where the beer comes out of taps set in the wall) negotiating a menu of tacos and burritos. The beers ranged in strength from 2.5 (which Jim had - it was really nice, in an orange-juice-and-lemonade-tasting sort of way) to 10.4, which I didn't have. And then, as there wasn't much else to do, we came home, defying the stanav and driving through Halifax and Huddersfield. I still have a very soft spot for West Yorkshire, although I'm very happy living here in the South.
Posted by Sarah at 06:00