Long time readers will recall that a few years ago I was sent some fabulous photos by Richard Pearson - including this one of Chertsey loading at Gopsall on August 18th 1970: 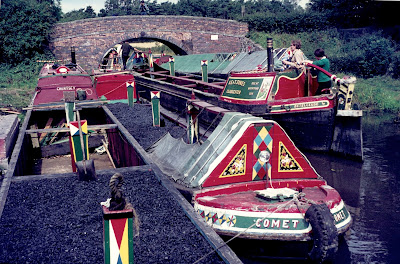 and unloading at Croxley Mill on August 24th: 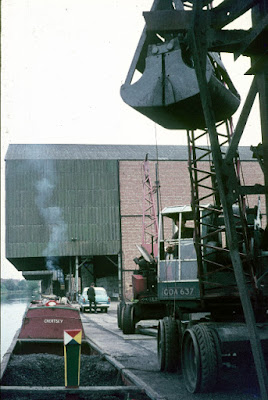 I know I've posted both of these before (although not together, I don't think) but I'll never have too much of them. More prosaically, these are the ones I know Richard is happy for me to post.

Richard, in case you were wondering, was Chertsey's steerer on that trip - Chertsey's last commercial carrying run. Over the course of it he took some very good photographs, and he has now put them on Flickr, starting here. I love this one, which I hadn't seen before until Richard sent it last week - is that a young Ian Kemp? But most amazing of all, is this - Chertsey on the Grand Union with 23 tons on; the last time (certainly to my knowledge) she was ever loaded. This might explain the mystery - which I recall Alan Fincher commenting on - of the loop of rope protruding from the mast box in the first photo - it appears perhaps to be a means of retrieving the mast? If you look through his albums Richard has some further fabulous working boat pictures from the 70s, including a lot of lovely northern boats of various sorts.

Although this was the only Gopsall-Croxley trip that Chertsey did under Richard Barnet's ownership - and the reason that young Richard Pearson ended up steering was because Richard Barnet really wanted to make the trip before the traffic finished (which it did on September 3rd that year) but couldn't get the time off work - records that Nick Hill has kindly shared with me show that she was a regular on the papermills traffic under BW ownership in the late 1950s and very early 60s.

Ever since assuming custodionship of Chertsey nearly ten years ago, I knew I wanted to do something to mark the fiftieth anniversary of this trip next year, and plans - albeit at an early stage - are now afoot and some key participants already on board, as it were - so barring catastrophe (or my boss not giving me the time off, in which case I likewise will have to recruit Richard Pearson to take my place) - at least two of the boats present that week will be retracing their wakes - and hopefully many more (I haven't even asked everyone yet). I think I might wait until after Hebden Bridge...
Posted by Sarah at 06:00