Grand Union boats like Chertsey, when they were built in the 1930s, were equipped with the latest modern conveniences, like electric light in the cabins. No dirty smokey hot oil lamps for them!

At some point in its history, Chertsey's electric lighting was removed, and for a long time we have been looking out for suitable replacements. What we - or rather, Jim - eventually found are not the same as the original fittings would have been - but as the cabin itself (being solid oak) is rather obviously not the same as the original one either, this didn't seem to matter too much. What we have got are a pair of old boat bulkhead lights (Bakewell has one the same in its back cabin) with frosted glass jelly mould shades. Jim got them at the boat jumble at Ardingly Showground last summer when he was there with the Lifeboat 'Advice on Board' (formerly Sea Safety) team. These seem to fit the bill very nicely. 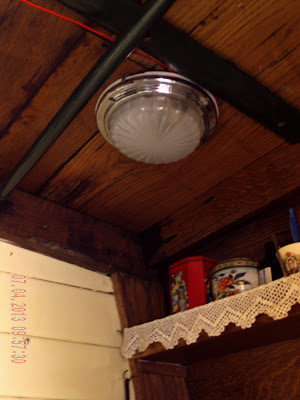 One on them has an integral switch, and that one is over the bed. The other didn't have a switch, so a redundant one from A.N. Other boat (sssshhh...) has been co-opted for the light over the table cupboard. 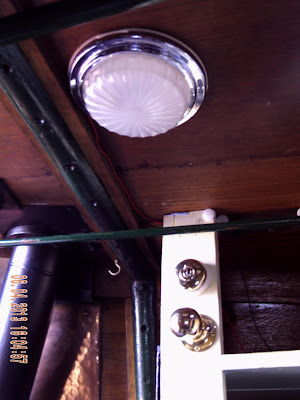 I haven't seen these in the flesh since Jim fitted them but he has sent these photos to give me - and you - a taste of electric cabin luxury. As the glass is frosted, you can't see that they are fitted with LED bulbs - a bit of a blessing given that Chertsey still has just the one battery and a dynamo charging it.
Posted by Sarah at 18:04