When I got Chertsey, the footboard - the step that you stand on to steer - was made of a big piece of ash, which continued across to form a shelf next to the stove. Only at the time, there wasn't a stove. When the Epping was fitted, a slice of the shelf had to be cut away. The step was also cut back, although this turned out not to have been so necessary, especially once the brackets supporting the step, which would have fouled the oven door, were replaced by a piece of steel welded in place. The loss of three or four inches off the front of the footboard is noticeable; if I want to stand inside the hatches and use the long tiller bar that like, my toes dangle over the edge, which is tiring after a while. For a long time, I was on the lookout for a new step - a nice big chunky piece of oak or ash or elm which might even give an inch or so of extra height. But nothing of the sort materialised, so I turned my thoughts to a plan B. It was thinking about putting vinyl on the step that presented a possible solution - if any join was going to be covered up, we could let a new piece of wood into the missing bit of step (you can see the shape of it in the 'Check' post), and, as luck would have it, if we were to cut off the shelf part (which I wanted to remove anyway, and eventually replace with a steel shelf next to the stove), this would just fit the gap. Now obviously it was necessary to find a strong enough way of joining these two pieces, so that it would be able to take the strain of someone standing on the edge as they got in and out of the boat. Jim reckoned that five deeply countersunk six inck coach bolts, along with glue, and possibly a plate underneath, would do the trick. As it was Sunday by the time we got round to doing this, we went to B&Q for the bolts. Big mistake. For a start, they only had five inch ones, so the sinking holes had to be drilled deeper. Then despite Jim having drilled proper pilot holes, every bolt either bent or broke - one broke in two places. They were worse than useless, and caused a whole day to be wasted. Yesterday we did what we should have done in the first place, went to Kelsalls and got some six inch Timberdrive bolts. These cost about £14 for 25; the B&Q ones were £6.85 for ten - so cheaper as well as infinitely better. 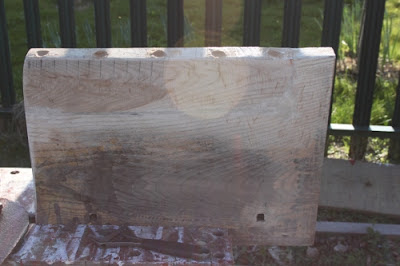 The footboard yesterday afternoon - spot the join
Once the piece was let in, Jim filled the holes and also used filler to smooth the join, before sanding it all down. Now in fact the join barely shows, so we were having second thoughts about putting the vinyl on it after all. The current view though is that we will, as the join will probably show once it gets dirty, and the vinyl will be non slip and waterproof, as well as looking a bit like that old photo! The edge and underside of the footboard will be painted with red oxide, as I have done with the lower step (I don't have a proper traditional coal box step on Chertsey) and I have liberated a piece of old brass step edging from one of Bakewell's side hatches where it isn't really needed as it is no longer used as the main entrance to the boat. This will keep the front of the vinyl from being caught and should look nice as well as marking a tactile edge to the step.

As you can see, the step is not completely square; the slightly sloping side was the best way of making the most of the available wood.
Posted by Sarah at 21:16