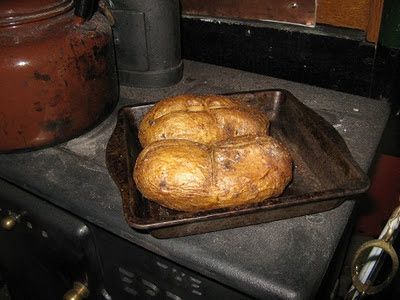 Having bought a 56lb bag of potatoes (£4) from the splendid, local, Whitegates Farm Shop, we thought we'd better set about using them, seeing as we'd never had so many before. Very nice they looked too, with a good mix of sizes and just enough dirt to show they're real. And, seeing that I have been keeping Chertsey's Epping going 24 hours a day - sixteen days now since I lit it - to keep the cabin warm and dry (which has been very successful) it occurred to me that I could be utilising some of that heat for other ends too, so today I popped a couple of nice big potatoes in the oven, having first rubbed them with olive oil and sea salt (you can take the girl out of the south...) and scored a cross in the top (easier than pricking it to let the steam out, and makes it easier to cut open too). My thermomenter said the oven temperature was around 130 degrees C, and I left them in for about five hours. Although I'm sure they were cooked through well before that, it didn't do them any harm; indeed, it was one of the nicest baked potatoes I've had.

Slow cookers seem to be all the rage again at the moment so I shall have to see what else I can cook in mine (although 130 isn't actually all that slow, I know).
Posted by Sarah at 17:38