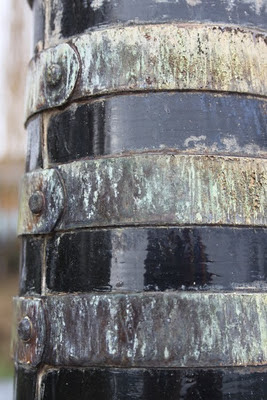 It is a well known fact that if you don't polish brass, it goes yellow, then dull, then tarnished. The easiest way to keep it looking good is to polish it every day; that way it only takes minutes.

The process of degradation is speeded up considerably by heat and by exposure to moisture. So the brass bands on the chimney really have a hard time of it. I had got Chertsey's back up to a decent standard, by cleaning them every day, or as nearly as I could. I didn't try to get them shiny in one go, but after a few days, it became easier each time to remove the new layer of tarnish and make some inroads into the underlying ones, and last week they were looking pretty good. 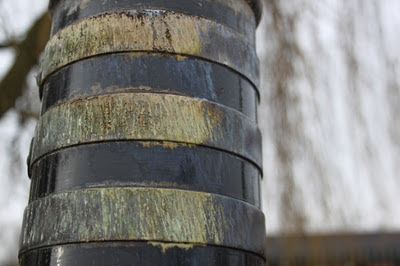 I noticed some interesting things in the process. The tarnishing was far worse on the starboard side of the chimney, away from the outside of the boat. Is this because this side gets warmer, owing to the very slight tilt of the chimney? Or is it because the prevailing winds deposit more damp on it? After a damp night, this side would have a thick, soft layer of tarnish whilst the other remained almost untouched. 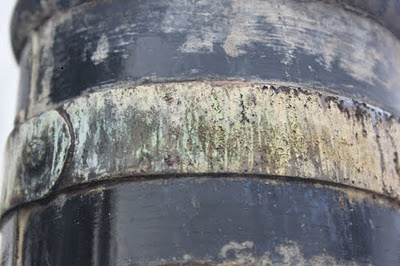 Then other things intervened, and the chimney got neglected for a few, damp, days - to quite stunning effect. The fresh layer of tarnish is so thick, verdigris-like, that it is peeling off on its own. I'm not sure the scaled down versions of the photos I took this morning will truly convey the effect, but on the big screen they look like photos of an oil painting, the chimney bands impasto, marked with brush or even knife strokes. It almost seems a shame to clean it off.
Posted by Sarah at 15:45