Willow: will he or won't he? 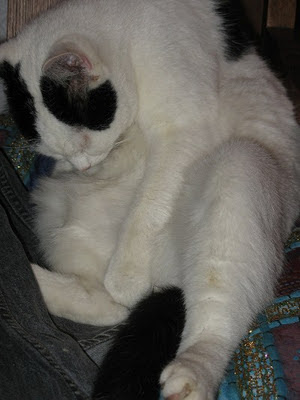 This is Willow. I'm typing this perched uncomfortably on the arm of the chair as he is curled up on the cushion and it would take a braver soul than me to try to move him.

We are trying to decide whether to take Willow to live on the boats with us. I have just checked and it would be OK with regard to the mooring, so now we really have to make a decision. Willow has form with boats. We found him, lonely and hungry, at Floods Ferry, gosh, it must be six years ago now. He happily came on board Helyn and settled down (leaving behind a good crop of fleas for us to discover next time). When we had to go home, and no one else showed any interest in looking out for him, we popped him on the car and took him home. With no basket or restraint, he sat on the back of the back seat and looked out of the window all the way. When we noticed him getting into any vehicle that left its doors open for more than a minute, we reckoned that he must have stowed away to Floods Ferry in someone's caravan, so could have been miles away from his home.

We already had three cats, thanks to a very persuasive (and slightly less than truthful) 'sales' woman at the local cat rescue centre; we still have those three, and they are going to move in with Sebastian. Willow is a very different creature though, and part of me thinks that he would take well to boat life. He would certainly enjoy the undivided attention of his humans, and curling up by the stove. He might also, however, enjoy catching small mammals, running away, and scratching the back cabin to shreds.

I would like to have him with us; I have a soft spot for his take-no-prisoners attitude. Unlike the female cats, he doesn't want to be liked and doesn't try to ingratiate himself. He's probably the most intelligent cat I've ever met (and I've known a few; when I was a child we had nine at one point - and I've hardly ever been without one either).

I know lots of cats do successfully live on boats, even while travelling - but also experienced second hand with Nick on Aldgate and Kat the problems they can cause by refusing to come home. Madcat I know thinks that he should stay at home and be one of the lads with Baz, but he's outnumbered by the girls, and four is a lot of cats in a small space - he's about as big as the rest of them put together.

So, I am still torn. I would like to have him with us, in an ideal world, but am concerned that it might just be a lot of trouble for all concerned. Any experiences and insights would be most welcome.

By the way, I ought to explain about his highly inappropriately soppy name. When we found him he was very thin and delicate looking, and wiothout wishing to pry too closely, we assumed that he was female. Even once we realised he was a he, he still seemed a gentle, delicate soul. It was only after getting home and eating non stop for a week that he revealed himself to be a bruiser of a tomcat in an admittedly handsome and graceful, but now far more muscular form. I did briefly try to change his name to the far more fitting 'Woolwich', but it refused to stick.
Posted by Sarah at 20:28