We left Smethwick at seven on Sunday morning. Andrew and Andrea on Dove had already gone, of course, but we still beat the rush. The BCN on a misty morning makes for lovely atmospheric boating. 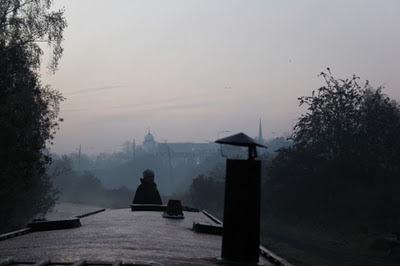 I learnt from a DVD about the BCN (from these people, but I can't find it on their list now) that the reason the motorway follows the canal like this, frequently not just crossing, but straddling it, is that this was the only land that was available when the motorway was built. It was salutary to be reminded that the red brick traditional arched bridges we went under were once in the countryside. 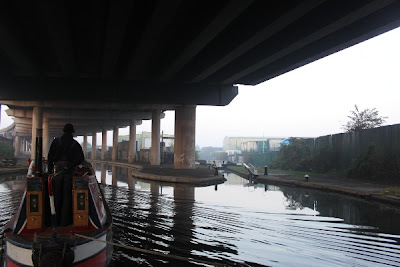 This of course was the day of the Wolverhampton 21, which I actually quite enjoyed. OK, I wasn't doing much of the bowhauling myself this time - I just gave Jim a carrot and a few sugarlumps - but I am still pretty sure that I would rather do Wolverhampton twice than Hatton once. I had also had the foresight to make some sandwiches in advance for lunch, so we neither had to stop, nor subsist on Mars bars/chips/thin air as on previous days. I can't recall how long it took us to get both boats down, but it was fairly respectable. Again most of the locks were against us, but not all, for a change, and Nick was a marvel, backsetting each lock as he worked the motor boat down, so it was ready for us when we arrived.

As we neared the bottom we met a quartet of (rather posh) students, who were doing a sponsored canoe trip. Some confusion ensued when they turned a lock that Nick had just made ready, but it was resolved amicably, and to make amends they decided to help us bowhauling the butty. Now picture an aeriel view of a lock with a single bottom gate... the recess in the side that the gate opens into. Now picture a canoeist walking backwards, without looking, along the edge of the lockside... and stepping straight back off the edge and into the lock - pursued by a very large butty with no brakes. Being in the gate recess would have saved him from being crushed of course, and as he was wearing his canoeing buoyancy jacket, and had three mates with him, he was quickly hauled out. By those of his mates who weren't busy taking photos anyway. When we left them he was rather folornly dismantling his mobile phone which had of course gone in with him. (Boating superstition no. 26: If you put your phone in your pocket, you will fall in.) They were hoping to get to Wolverhampton's Broad Street Basin for the night, as they had been promised safe storage there for the canoes. As this occurred at the second or third lock from the bottom, and at was already teatime, this seemed a trifle optimistic, but I didn't like to say. I suppose they could have made it easily if they walked, and carried the canoes.

We had had a wild dream of making it to Stretton that night, but it was not to be. It was still light when we went through the stop lock at Autherley and on to the Shropshire Union (home at last, we felt), but dusk was falling fast and we made it as far as Wolverhampton Boat Club where we tied up in the dark. A genuine dawn to dusk day's boating. Wonderful.

By the way, Captain Ahab had just come back from the BCN and has written some really fascinating posts about its geography and history. If you're reading this later, check out his archive for around this date.
Posted by Sarah at 10:50