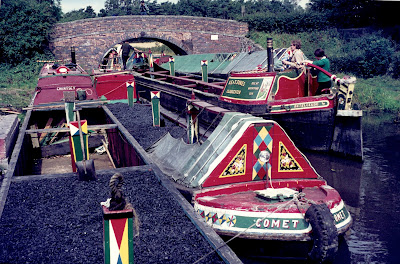 photo: Richard Pearson
Following that picture I posted a couple of days ago of Chertsey unloading at Croxley Mill (and the comments I made at the end) Richard Pearson has sent another wonderful photo of Chertsey loading at Gopsall - no copyright issues here, it's one he took himself (that's more than likely Harry Arnold snapping away on the bridge) and he's very generously happy for me to post it.

I feel very lucky to have so many good photos of Chertsey at various stages of her life, and particularly from this exciting time. I think this is an absolutelt brilliant picture, in the thick of the action, and better than the longer distance shots taken from the bridge.

What I find interesting here (following on from my musings about the paint scheme in the unloading picture) is that judging by the stands, mast, back end beam and tiller, Chertsey seems to have been painted to match the other boats, belonging to Tony (I think) Jones. Could this have been done deliberately, bearing in mind that this is early in the days of Richard Barnett's ownership, and he later changed the colour scheme completely, or is it just a lucky coincidence of traditional colours?

(I've not reduced the photo so you can click on it to get a bigger version and home in on the marvellous detail)
Posted by Sarah at 18:27