I got a lovely surprise today in the form of an email from Richard Pearson. He'd seen this post from last June, and was prompted to send me this photo, of Chertsey unloading (or preparing to unload) at Croxley Mill. 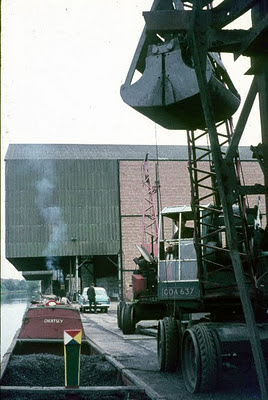 This would be in August 1970, the loading note showing that they'd loaded at Gopsall on the Ashby on the 18th, and had been checked off (presumably in arrival?) on the 24th. It was, I believe, on the 28th that the very last load arrived here from the Ashby.

In earlier times, there would have been a mechanical conveyor, known as a 'jigger', for unloading the coal, but by 1970 this had been replaced by the mobile grab shown in the photo. Gerald Box (p. 5)* describes how members of the Ashby Canal Association had to manufacture and adapt the unloading equipment themselves, unhampered by their lack of metalwork expertise, as part of proving the traffic was viable and thus securing the contract.

Interesting to note Chertsey's colour scheme at this time; most photos I have from the seventies show her in dark blue, red and black, which continued well into the eighties.

Another postscript: There is a set of photos taken by Harry Arnold of Chertsey et al loading at Gopsall, but I can't afford his prices and even if I could I wouldn't be allowed to post them on the internet, but you can see two of them on page 27 of the 2009/4 HNBOC newsletter, should you be able to lay your hands on one.

*Clinging on: The Moira Cut, Coal, and the Last Days of Carrying, Ambion Publishing, 2003
Posted by Sarah at 16:09