A slice of Bakewell's past

Here is some of what I know so far...

Bakewell was delivered to the Grand Union Canal Carrying Company on October 30th 1936, almost 76 years to the day before I bought her (I'm going to revert to saying 'her' rather than it because it's easier and does actually feel more natural). She was half of one of 24 pairs ordered from Harland and Wolff; the 'Big Woolwiches'. While there were 48 large Woolwich motor boats built (and 38 large Northwiches), all in steel, all but 24 of the 86 were destined to have wooden butties from Walkers of Rickmansworth; the 'Big Rickies' of which few remain. Of the 24 large Woolwich butties, 21 are still extant in some form; three having been scrapped by British Waterways in the late 1970s (one under a false name; the butty currently called Berkhamsted is widely believed to actually be Ayr)

Bakewell was intended to be paired with Bletchley (which is currently carrying coal on the GU paired with small Woolwich Argus). Bletchley's fleet number was 119, and Bakewell's original fleet number, following GUCCCo's convention at the time, was 119B. This was later changed to 224. Bakewell's earliest recorded pairing was with Tyseley (now home to the Mikron Theatre Company) in 1944. That wonderful book of photos, A Canal People, has two stunning photos of Bakewell, on page 111 and 118, looking newly painted in BW blue and yellow, complete with fleur-de-lys style embellishments.

Following nationalisation in 1948, Bakewell remained in the BW carrying fleet, and was in fact one of the very last boats carrying for BW - as part of one of three pairs 'on the Lime Juice', a short run bringing imported concentrate in barrels from Brentford to Roses factory at Boxmoor. This traffic continued under BW until the early seventies, when BW withdrew on the grounds that the boats were beyond economic repair, although it (along with some of the boats, but not Bakewell) was taken over by independent carriers who continued until 1980 (I think - I must check with Tam and Di!). There are some fantastic photos of Bakewell on the Lime Juice in 1967 in this month's Waterways World (and thank you to everyone who has brought this to my attention).

Alan Fincher took these photos of Bakewell in the summer of 1974, probably just after she finished the lime juice traffic and prior to being sold to UCC. 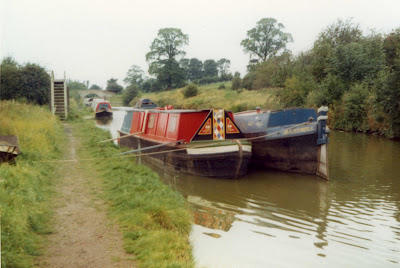 photo: Alan Fincher
That's Halsall in the background... (Madcat, you never did give me your email address!) 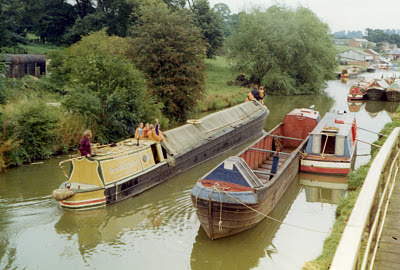 photo: Alan Fincher
In August 1974 Bakewell was sold by BW to Union Canal Carriers of Braunston, to become a camping boat - it would be great to see some photos from this period. She remained with UCC until 1983, when she was sold to the first of many private owners, who converted her to a houseboat with a cabin for much of her length.

Not any old private owner though; one Rex Wain. Yep, I have a boat (probably the only boat) with a Rex Wain steel cabin, and still with the solid and meticulously executed lining of douglas fir T&G and elm that he put in (albeit painted over now). Much of his fit out was removed when the boat was rebottomed, but part of a kitchen dresser remains, in the living room. (This alone makes it so much better a boat than Bodmin; what a lucky escape we had there.) Another illustrious previous owner was the writer and waterways historian Euan Corrie. In contrast to Chertsey, Bakewell has been through a large number of owners since leaving carrying service, none keeping her for more than four years, until last owner before me, who had her for eight, had her rebottomed and extended the conversion with a new kitchen. I wonder whether this a natural fate of butties, and whether I will buck the trend.

Sources:
Alan H. Faulkner The George and the Mary
Tim Wilkinson Hold on a Minute
Sonia Rolt A Canal People: The Photographs of Robert Longden
Waterways World, December 2011
and especial thanks to Pete Harrison and Alan Fincher.
Posted by Sarah at 11:28