Fill her up, sir? 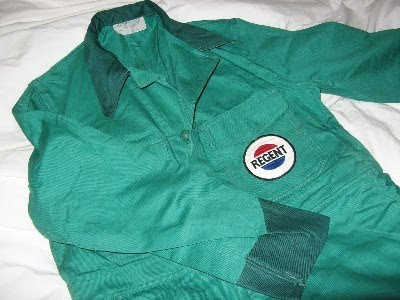 Been having a bit of a clearout today. The number of things that we really don't need, but still feel we ought to hang on to, is diminishing. For example, I have finally decided to throw out two jigsaw puzzles that I have been carefully husbanding since about 1967. One of then depicts a headscarfed Mrs Rabbit, surrounded by little rabbit-lets, outside her home in a hollow tree, selecting fabrics from the hamper of a travelling tinker who, from his ears, is clearly an elf. This is simply not the sort of thing one sees any more, and I fear we are the poorer for it. If we find the missing two pieces, I shall keep it. The other features Noddy on a wooden train, with Big Ears as the guard, and has nothing to recommend it, really.

But one thing I do still feel obliged to keep, an ancient jumble sale find, is a pristine, never used, set of two-tone green overalls bearing the badge of the Regent Petrol Company. They are jolly smart, and very nearly fit me, being just a trifle over long in the extremities. I spent ten seconds in extensive research and uncovered, from this website that the Regent Petrol Co.:

was founded in 1947 following a merger between Texaco Petroleum Products and Trinidad Leaseholds. Prior to the war the Regent brand name had been used by a small distributor of motor spirit who had been taken over by Trinidad Leaseholds in 1931 and it was this name that the newly merged company used. 1953 saw the end of pooled petrol regulations and Regent began to broaden its operations by selling branded petrol in the UK. The company also had a tanker fleet and this expanded through its Texaco connections. Texaco had various North Sea interests including refineries etc. Texaco took full control of Regent in 1967 by buying out Trinidad Leaseholds and began to phase out the Regent brand in favour of the Texaco brand. Texaco also had other small brand names and in 2004 relaunched them all under the Regent brand where the familiar red white and blue branding can still be seen today.

I am sure I will find the right occasion to don my petrol pump attendant's overalls and wear them with pride... even if their advertising was a bit dodgy. Ahem.
Posted by Sarah at 19:30