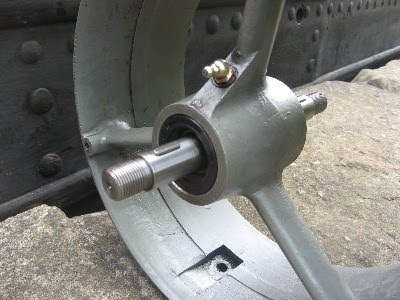 It looks like a very big hurrah for Trent Valley Bearings in Long Eaton. We went there initially to get new... you've guessed it... bearings for the engine's cooling fan. We knew we needed a new shaft too, as it was worn from where the bearings had been rattling, greaseless, and the threads were badly worn, and were wondering where to go for that, when I notices on the counter a flyer etting out all the services they provided, one of which was machining. So we left the old shaft with them, and within hours had a quote of £80 to make a new one. We took advantage of the fact that it was all in house to get them to put the whole assembly back together too, and fit it into the casting that houses the fan. This process was begun on Monday morning, and this afternoon we collected the complete unit. How's that for service, and a total cost of £150. Then it was next door to Arkwell Fastenings for two nuts and we were away.

One spacer however needed machining because it had sustained some damage in being removed, and we hadn't thought to take that along. Here Trevor came to the rescue (he is the next door neighbour of the very forebearing chap at the bottom of whose garden we are tied up. The railway is their joint enterprise and Trevor is in charge of (and no doubt built) the steam loco), taking Jim off to his shed to demonstrate his lathe. Really, this absolutely could not have happened in a better place. Jim has started to reinstall everything and touch wood, if it continues to go smoothly we should be on our way again tomorrow. But I don't want to speak too soon.

Meanwhile I have been doing more interior painting. I had already decided, based on what was already here, to go for a relatively austere look with mainly cream gloss and a few bits picked out in green, with minimal graining. It was only later that I read in one of the Tom Foxon books his reference to the cabin of the boat he had just bought being still painted in Waterways' cream and green - I must follow this up, but I won't be changing my decor for a while anyway.
Posted by Sarah at 21:45