Following the advice of @MrTimDunn, which I now can't find to link to (no, I will never learn to love Twitter; it's so messy) I dug out my (sole) Pevsner to inspire a walk yesterday. I am fortunate that Sheffield has a relatively recent edition, which was only eight years old when I first came to Sheffield and bought it, but 2004 is still quite a while ago and things have been changing fast round here.

I have an added disadvantage  in that my natural sense of directuion and ability to orientate myself is abysmal, especially when trying to look at my phone in bright sunlight with the wrong glasses on. As a result, the only building on my selected walk (apart from the cementation furnace) that I was able to identify was the Edward Street Flats. 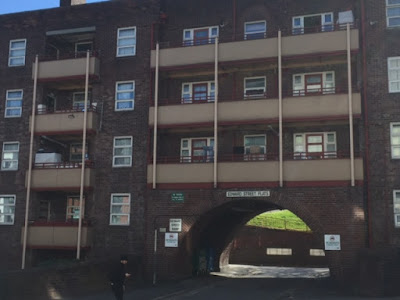 I frequently pass these on the way to work. Also, they helpfully have a big sign saying 'Edward Street Flats'.  I like that they don't have a fancy name.

These were actually built during the war, between 1939 and 1943, I have assumend by the City Council although Pevsner doesn't say; nor does it say how many flats there are (other sources put it at 133), although it was apparently 'the largest development of tenement flats in the city centre'. They're built in a 'D' shape around a large central green and vary between three and four storeys according to the slope of the site. 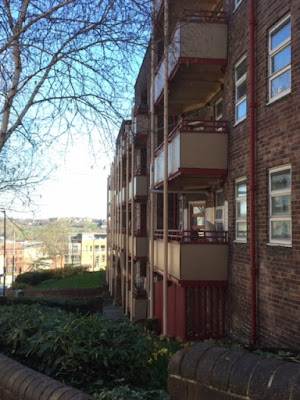 What's always struck me about these flats are the balconies, which look like a heavy-handed 1980s or 90s addition, with their massive tubular steel construction and brackets literally bolted on. 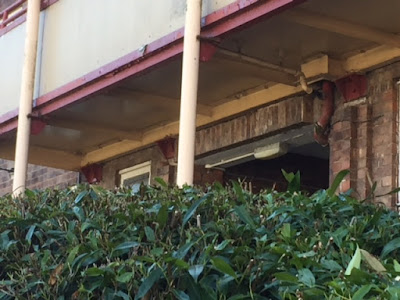 To the extent of having hacked away some of the original brickwork,

which is unfussy, but elegant and coherent. 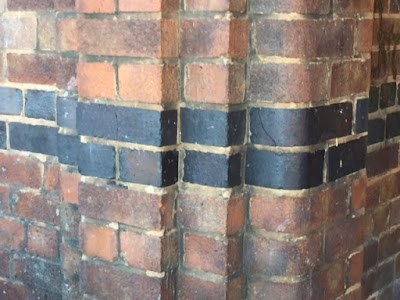 And so at odds with the elegance of the stairwells: 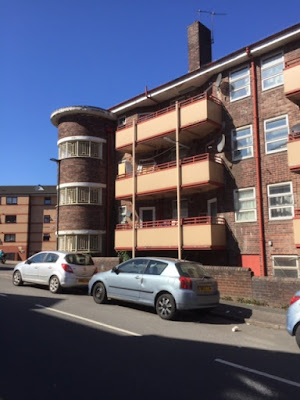 or as Pevsner puts it, the 'streamlined staircase turrets:

So I had idly wondered whether the balconies were a later addition. A look at the floorplan of a typical flat suggests otherwise though: 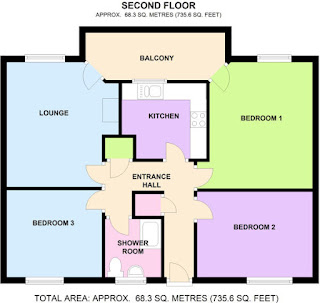 The balcony is obviously an intrinsic part of the design (and a rather nice design it is too).

This archive photo from Picture Sheffield (by J.A. Coultard) shows that when built, the flats had brick balconies 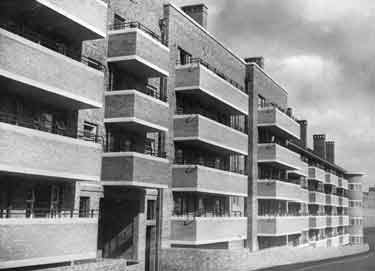 which, while still rather heavy, contributed to what Pevsner (p. 161) describes as the building's 'pronounced horizontal emphasis' which evidences the 'influence of Dudok', more clearly seen in this second archive photo by the Housing Department (the notes on here suggest, contra Pevsner, that the flats were built in 1934 and extended in 1943). 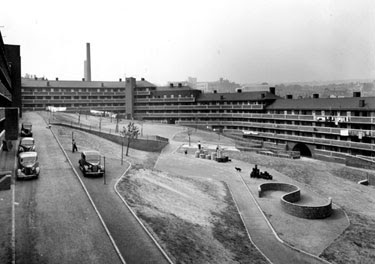 Pevsner notes that the balconies have since been replaced in tubular steel, but does not say when or why. Browsing through the photos on Picture Sheffield suggests that it was during the 1980s, and I can only guess that the reason was structural (the new balconies are very clearly supported from the ground, whereas the original ones weren't) - one would like to believe that it wasn't aesthetic, although in the 80s, who knows.

Obviously I then also had to look up Dudok (1884-1974) who was 'the father of Dutch modernism'. If you like his stuff, then the place to go, apparently, is Hilversum.