Off on a new track

You're probaly aware that I have a vague interest in railways. I suspect few historic boaters and inland waterways enthuiasts confine their passion to one means of transport, one form of infrastructure.

My railway interest long predated my discovery of boats and waterways. It was inculcated and nurtured from birth by my father (who if he was disappointed not to have a son, certainly never let it show). His father and grandfather (whom I've written about here) worked throughout their lives at the GWR Swindon works, the former definitely, and possibly both, as boilermakers (and also between them at various times as plateworkers and waggon-builders and probably more besides).

Despite (or maybe because of) being of an older generation than most of my contemporaries' parents - and indeed my mother (he was 47 when I was born, at a time when the average age for first parenthood was quite a lot lower than it is now) he did not appear to have any fixed ideas about gender-appropriate forms of entertainment for young childres, for which I will always be grateful. From the age of about four or five he would take me (and later my sister as well) to the Science Museum, industrial and transport heritage sites, and above all - because it was local - the Bluebell Railway (when it only ran between Horsted Keynes and Sheffield Park). 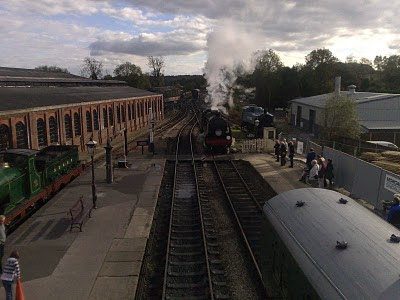 photo from my last Bluebell visit in 2010

He also commuted to work and took us on trips by train (he never drove, and my mother didn't get a car until I was ten) so railways were always associated with adventure and special days (and also getting your hands and knees absolutely filthy if you fell over in a smoking carriage). After he retired from his job in London in 1977 he took up what was essentially a full time unpaided role at the Brighton and Hove (as it then was) Engineerium, where he remained, doing the books and escorting parties of schoolchildren around, and occasionally (but joyously) stoking the boilers, for around a decade, so we spent a lot of time there as well.

So, I have always had that background interest, but have been inhibited from developing it by the sheer scale of the field, and the fact that there is so much scope for displaying one's ignorance (as I discover nearly every time I post something about trains). Over the years - the more I have learnt across all kinds of fields - I have got much more comfortable with being ignorant, and wrong; after all, how else do we learn and expand our knowledge? But the size of the topic, the knowing where to start still intimidated me. I have joked that I spot boats because it's more manageable than spotting trains (and that's possibly the only reason); that with my capacity for obsessiveness, that would be too dangerous a route to start down. Better not to take that first step, than risk being sucked in.

But it seems it won't leave me alone.