That paint job... at last

Blogging on the iPad is great, but it's really only practical to post photos taken with the iPad itself. When you look at these in the blog on an ordinary computer, they look terribly low-res; click to enlarge them and the resolution actually improves. No, I don't know how that works either.

Of course this trip was the first boating outing for my new Canon EOS 500D digital SLR. I've been umming and ah-ing about getting one for years, as I loved my old film SLR, and Jim took the decision out of my hands by buying me one for my birthday (and I'd only asked for a Beatrice stove and a mangle). But it is so new and precious that I didn't dare get it out as much as I would have done the (now tatty) old Canon compact; an irony which I shall have to overcome.

Rewinding to August 17th, and we arrive at Alvecote to pick up the newly painted and signwritten Chertsey. Exciting if not nerve-wracking for me, so hard to imagine how Martin must have felt as he delivered it from the dock at Grendon under our waiting gaze. 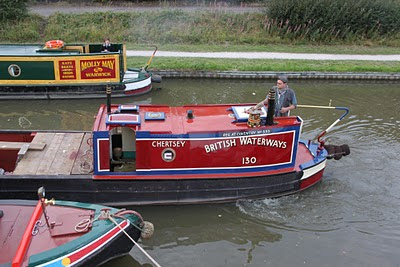 As you can no doubt tell from the photo, I was delighted with Martin's paintwork, and Dave Moore's signwriting. The overall effect is everything I'd hoped and more. 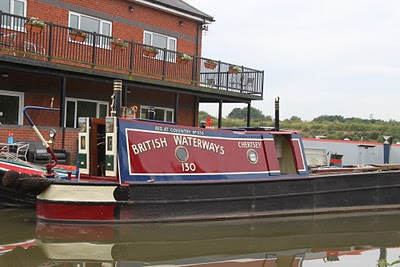 There is evidence and sound reasoning behind the unusual combination of signwriting and colour scheme which I chose - inspired by a comment from Paul (Capricorn) at Braunston last year. This represents a very short lived paint scheme (probably used in 1948 only) from the period immediately following nationalisation when the GU boats (because they were directly owned by the canal company) has passed into the ownership of the Docks and Inland Waterways Executive (who were already branding themselves 'British Waterways' although the British Waterways Board as a body didn't come into existence until later), but before FMC had sold out to DIWE and before the yellow and blue BW colour scheme was developed. In short, boats that were repainted at this time were painted using existing stocks of GU paint, in its wartime 'austerity' colours, but with a different layout, and signwritten 'British Waterways'. If you have a copy of Sonia Rolt's A Canal People there is a photo on page 96 which shows this clearly.

I leapt at the chance to use this scheme because the austerity colours are my favourite, and if Paul hadn't made his suggestion I probably would have gone for that livery - but the layout's not the most aesthetically appealing with its lack of coachlining. The GU/BW scheme also had the attraction of being original, and thus interesting, and it seems appropriate to be memorialising the British Waterways name as it seems likely to disappear next year (though whatever the new charity is called, to some I guess it will always be 'Waterways' as it has been for the past sixty plus years).

There is no evidence that Chertsey was ever painted in this scheme and to be honest it is vanishingly unlikely. The only photo I have of Chertsey prior to being sold by BW in the early 60s is the very early one that is reproduced in The George and the Mary, in spanking new GU two blues. All else is guesswork, so that guess is as good as any. 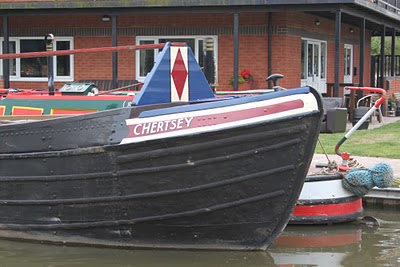 There are a couple of non-BW touches: the heart on the cabin slide, and the diamond on the deckboard. Both of these are aspects of Richard Barnett's paint scheme (it would be stretching things to call it a livery) which Chertsey has carried for more than half its life, from at least 1970 to the current repaint (in fact, I still have the old deckboard with its paint intact). So like the boat itself, the paint scheme is something of a pastiche, different areas representing different phases of its life, which I think is OK.

And it doesn't half look nice.

The colours by the way, as recommended by Phil Speight, are Craftmaster Union Blue (not, he was insistent, the darker Oxford blue often seen in austerity schemes), S. C. Crimson (gorgeous), and Cream.
Posted by Sarah at 18:46