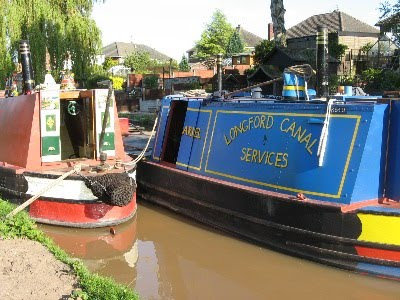 Here we are topping up the diesel from Liam in Middlewich. We'd passed him that morning, but hadn't had enough cash on us, so he said he'd catch us up in Middlewich. He arrived about an hour after us - having left an hour after us, served three customers and made a detour along the way. When he arrived, I was washing my hair, again - last time Ariel passed when I was doing that at Kings Bromley, Liam videoing the whole thing. It's nice now knowing a few fuel boats and buying from them - a couple of bags of coal from Alton at the Port too. I used to be too shy to ask and too nervous to seek them out, but now I actually know the people it's great. So far Chertsey has had diesel from Towcester, and Turners at Wheaton Aston as well as from Ariel. We've not got a properly calibrated dipstick (and didn't think to make one when we were starting from an empty tank, d'oh) but Jim has calculated usage at between one and one and a quarter litres an hour. We've never filled the tanks right up and I don't think are ever likely to! I've forgotten what the capacity is, but 'massive' just about covers it.

This was one of those posts which I started without having any idea what I was goinmg to say - does it show?

Tomorrow we are driving up to Braunston where hopefully work will soon commence on the gunnels, fore end cants and other bits of woodwork, so there will be some restoration blog stuff to read again soon!
Posted by Sarah at 19:42