Back to Chertsey at last, for a spring clean and a look over before the season starts. Lots of little jobs out of the way and a lovely couple of days in the spring sunshine.

The first job was to take the dynamo to a man in Hednesford to check it out and if necessary sort it out. You have never seen so many dynamoes and assorted bits in one place before. The trouble is, if the dynamo turns out to be OK, and it's the regulater at fault, then we will have to take that somewhere else. At present, the battery just isn't charging. On the other hand, we hardly notice, as we use so little power - we just take the battery home and charge it between trips, and we now have a spare too. One day, however, I would like some Grand Union style lights in the cabin, and with their 20w (or thereabouts, that was a wild guess actually because I've completely forgotten) bus bulbs, power consumprion will be a consideration. Still, an opportunity to post a gratuitous photo of Chertsey's electrical board, complete with ancient and still working bus bulb. 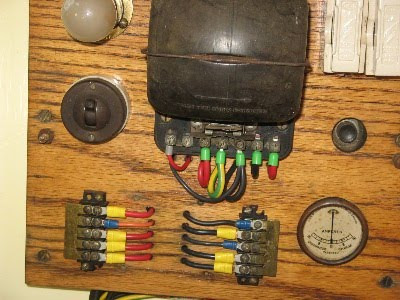 Other jobs accomplished over the weekend included cleaning all the old leaves out of the hold, refitting the deckboard (needed because it's the mounting for the tunnel light); repainting and putting a liner in the chimney (still needs a bit of tweaking, that); cleaning and polishing everything, including the stove and all the cabin brass. Portholes next time! Jim made a pattern for a piece of steel to bolt under the gunnels at the back end so that we can extend the back end planks over the fresh water tanks. This will hide the tanks, and make a useful deck. All removable of course, absolutely no welding!

Having been shown the under cloth conversion on Prince, I am now quite taken with creating a flexible, dark and cosy space under the cloths - but again, with no permanent or fixed superstructure. Certainy, the constant pumping out of rainwater and cleaning out of leaves (and frogs) brings home the advantages of having cloths! Finally, we attached the fenders. I would say re-attached, but these are not the same ones, the brand new ones that we bought last year at vast expense. Nope, they are now destined for Warrior (cor! New fenders!) while Chertsey now has Warrior's old ones, still in excellent condition and rejuvenated with a fresh soaking in creosote substitute. So why the swap? Because these ones were made by Joe Hollingshead, and belong on the old boat.

Anyway, I must get in the bath now. More on the weekend's activities later.
Posted by Sarah at 20:42