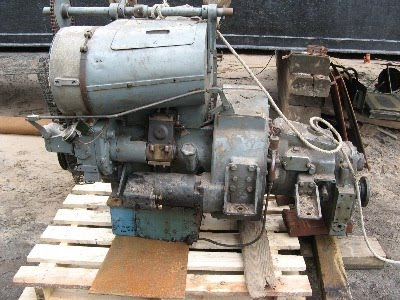 You may have noticed that there has, so far, been no report of the engine's arrival in Newhaven.

We left it all set up on a pallet, ready to be collected by Speedshift, and then we went home, hoping to arrive before it did. Well, we certainly did. The lorry arrived to collect it, but - being bigger than we'd anticipated - couldn't get far enough into the yard to pick it up - and there was no-one around at the time to crane it nearer the entrance. So we thought we'd put that one down to experience, and arrange another means of getting the engine home.

In fact, on Wednesday morning, I was in the very process of nagging Jim to talk to the man over the road about borrowing his trailer, when I got a phone call saying, presumably I knew that the engine had just been collected.... er, no - it was entirely news to me! So Jim rand Speedshift, and they had indeed collected it, and it should arrive Thursday or Friday... so we waited, and by Friday evening still no sign of it (but with stories of chaos on the roads perhaps no surprise), so rang them again, and it is now supposed to be arriving on Monday or Tuesday - by which time we will be back at Stretton for another fun-filled week, and it will fall to Sebastian to welcome a ton of engine onto the drive.

So the verdict on Speedshift so far... good service, in that they made a second attempt to collect it and, hopefully, aren't going to charge twice, but a rather woeful lack of communication. Further judgement reserved until it actually arrives....
Posted by Sarah at 19:28