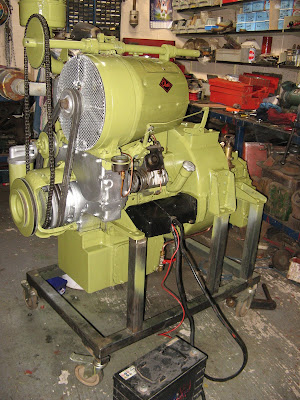 Now, this wasn't deliberate, honestly. It's not that we really, really like dirty lime green as an engine colour. We chose the colour for Warrior's engine on the basis of a throwaway remark from Tony Redshaw ('You don't want to paint it the original National colour, it's like a dirty lime green with a bit of black in it') and a visit to the former National works at Ashton-under-Lyne where we saw steel roof beams painted just such a colour, backed up by odd bits of paint found on dismantling the engine. No one else was ever exactly convinced of the rightness of this chromatic choice, but it was distinctive, not to say unique, and we liked it.

Well, owing to what must be a rather strange coincidence, it is unique no longer. And guess who has just bought the only other dirty lime green engine in existence? Yup. Me. (Thats a 'dirty-lime-green engine', by the way, not a 'dirty lime-green-engine'. The engine is a clean as you could ever wish to see.)

Way back when I first bought Chertsey, with its seized PD2, Jim discovered that there was a rebuilt PD2, which had done less than 200 hours since, available for sale. I hummed and hawed for quite a while, the ideal obviously being to rebuild the existing engine, which was the one fitted by BW in 1960. Then, while casually chatting about it one day the scales suddenly fell from my eyes and I realised that it was the obvious thing to do. The old engine would have to come out anyway, so why not replace it with this other one, which is very very nearly identical. It it officially a temporary measure, to get afloat and moving, but it is an indefinite sort of temporary. I won't, though, ever get rid of the former engine or separate it from the boat. A spare is always useful anyway, and after the experience with Warrior of dealing in National/RN prices it seemed an absolute snip.

So we arranged to go and see engine #2 and the seller moved it to his workshop in order to rig it up so that we could see it running; he then discovered that he wasn't 100% happy with it, so he stripped it all down, identified and fixed the problem; he then thought that some of the cowling could be improved upon, and having replaced that with parts from other engines, it all needed painting, so he painted it. And all within the original price.

So finally, on the way up to Stretton last weekend we stopped off to see it, and hear it run, and were mightily impressed, and made the final decision to go for it. I knew it had been painted of course, and was expecting to see it in grey, or at a pinch, duck-egg blue. But no, it was resplendent in shiny Warrior-style-National green (Jim's recollection is that this was matched to some of the replacement tinware). At least if we scrape it going in, we'll be able to touch it up.

And talking of Warrior, I'm off tomorrow to join Jim on board in March from where we will undertake our spring trip into Cambridge, so we'll have a bit more travelblog for a change.
Posted by Sarah at 13:38