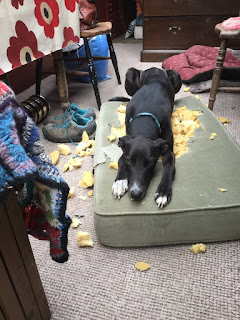 When an upholsterer was fulfilling an order for cushions for the Alvechurch hire fleet some time back in the 1990s (or thereabouts). I wonder if they gave any thought to how their handiwork would end its life - and the various roles it would fulfil before that. One set of cushions ended up in a 70' boat called Tawny Owl. After its career as a hire boat, Tawny Owl was bought by Richard and Sue (and was to become a stalwart, nay champion, of the BCN Challenge). After a while, in 2011, Richard and Sue decided to change the upholstery (and possibly the amount of beds) and asked on CanalWorld if anyone wanted four six-foot long foam cushions covered in pale green Dralon.

Yes please, said the recent purchaser of Bakewell (that's me, for anyone who hasn't been keeping up), because I had no mattress for the butty's crossbed. The four six-foot cushions became eight three-foot ones, some still covered in Dralon, some not. Three of them stayed on Bakewell... maybe they are still there two more owners later. They were certainly very good and firm. One piece of Dralon-less foam is on the bench on which I am now sitting. Three pieces were the spare spare bed, and lived in the cratch awaiting being made up into a bunk (but I think now may be at home in the attic, for the same purpose) The final, completely Dralon-encased piece was a luxury dog bed for Little Ricky. Well, it's not quite dead yet - in fact Geoffrey is sleeping on it as I write - but it has rather suffered Ricky's attentions last night.

I wonder what has happened to all the other upholstery from that particular order, and how much of it is still in use. It certainly was very well made and long lasting - until it encountered Ricky's claws.
Posted by Sarah at 20:29