I first came across the term 'rivetcounter' at Newhaven Model Railway Club in the 1990s. I have no idea what I was doing at Newhaven Model Railway Club in the 1990s. It might have been something to do with regeneration. But I have always had a fondness for model railways, so I would not have been a reluctant visitor. 'Rivetcounter' seemed to be an epithet that veered between insult and respect, which side it fell being very subjective. A rivetcounter was someone who slavishly pursued accuracy in their modelling, and was quick to point out its lack in others'.

I have no chance of spotting any inaccuracies in model trains. But it is striking that those same people who wouldn't put a rivet wrong on their loco are remarkably casual about their boats. It is, of course, gratifying that one of the layouts at the Eastbourne Miniature Steam Railway featured a canal 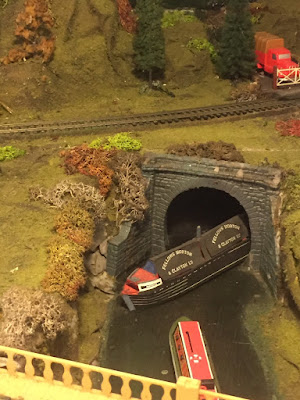 complete with tunnel, bridge, and a modern and a historic boat. And, excitingly, an accident waiting to happen as the historic boat - if indeed that be its fore end - makes a spectacular hash of exiting the tunnel (one worthy of me circa 2007, perhaps).

Now, joshers are not my forte, but this - unless it has stolen a set of cloths - purports to be one. 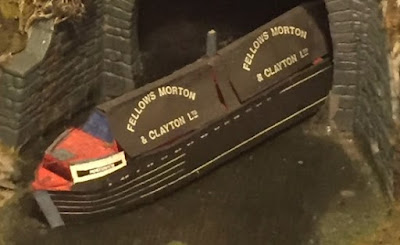 But it doesn't look much like one I've ever seen. When I first saw the model, I thought it was the stern end of a horseboat (and not a josher one at that). Rather like my icebreaker (thanks, anonymous commenter!), it appears to be sitting on top of the water.  It has no strings (how could they forego the joy of making strings out of sewing thread?) Likewise, ropes. It has no sidecloths, come to that. What is that protuberence, too big, too far back, and the wrong shape to be a mast? Was this, I wonder, based on a real boat at all; even a photo of one?

Not that this spoiled my enjoyment at all, as you can no doubt tell.
Posted by Sarah at 20:05