The most useless waterways map ever?

And guess who's produced it? 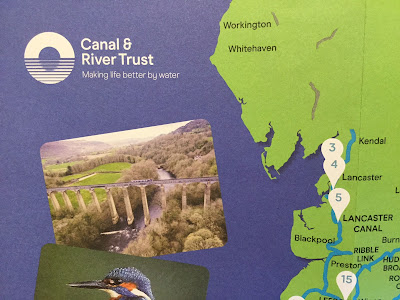 I am indebted to my cousin Janice who picked up a leaflet - well, a couple of leaflets actually - at a recording of Gardeners' World at the NEC.

These leaflets are meant to make you want to visit your local waterway. The bigger, earlier, version has 100 attractions on it. Then there's a later one, into which they have squeezed nineteen more - mainly, it would appear, on the K&A. The basic map is the same though, even if the later version is smaller and flimsier (and hence does not photograph so well. 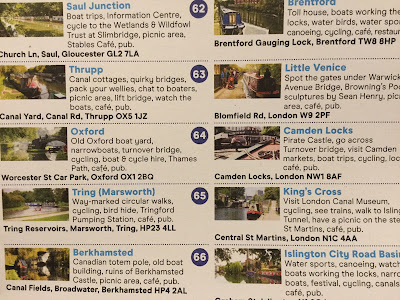 Lots of places (including Thrupp and Braunston) have 'quirky bridges'; others, such as Garstang, have 'quaint' bridges. At other places the big attraction is a turnover bridge. In many places you can see boats, narrowboats, or boats using locks. At Gunthorpe, the attraction is a 'huge bottom gate' (those unfamiliar with lock terminology might well boggle at that). In Oxford, apparently, there's an old boatyard... Just how up to date is this?

Now you know, and I know, that canals and locks and everything associated with them are massively attractive. But if we didn't already know that, or weren't that way inclined, would this leaflet get us setting our sat nav to those carefully provided postcodes (good luck parking!)? And might we not, in a number of cases, be rather disappointed when we got there?

But that is not the worst of it. At the bottom there is a disclaimer that says: 'This map includes waterways managed by members of the Association of Inland Navigation Authorities (AINA). There are other inland waterways that have not been included. the [sic] information on this map is for guidance only, for accurate information please visit our website.'

There is a key showing that CRT waterways are marked in blue; AINA in grey. The grey ones aren't even dignified with names. But you can find the Thames, if uou know where to look: 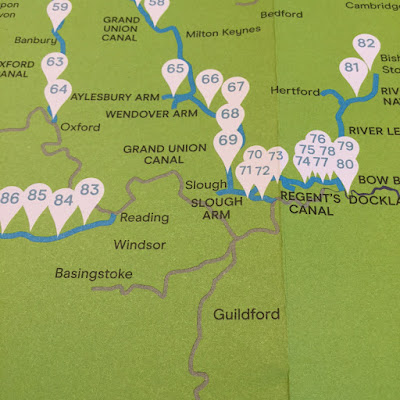 And the nameless Middle Level, and Broads are at least fortunate enough that their navigation authority is a member of AINA.

But look what happens if they're not: 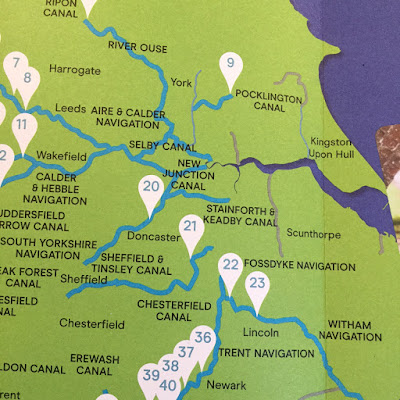 According to this map, produced on behalf of and put into the public domain by CRT, the Chesterfield Canal is detached at both ends; the SSYN reaches a dead end at Keadby (and that's if you can follow the completely useless labelling of the waterways). The tidal Trent has been expunged. This undermines one of the main selling points of the inland waterways, which is that there's a massive, connected, network, but worse than that, it's just wrong - incorrect and misleading. And surely, at least some of the missing chunk is a CRT waterway...

So, OK, in the small print they admit that it's inaccurate ('for accurate information see our website') but what sort of guidance is it giving? And in any case, if you do go on their website, you get a map with exactly the same chunk of Trent missing. 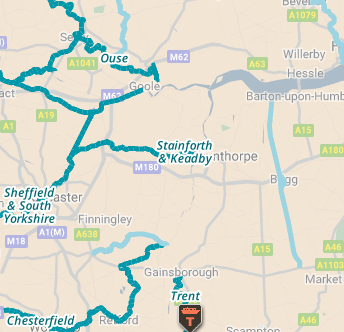 Here it is clearer that it's the non-CRT bit (downstream of Gainsborough) that's been omitted, but why?
Posted by Sarah at 21:08