The lounge and the dining room in my new house both have fireplaces, of a sort. The dining room has an alcove, all neatly plastered and painted, while the lounge had a horrible modern fake coal gas fire set into the wall.

To go in these two spaces, I have a cast iron fireplace and a Lily stove. Long time readers will recall that Warrior has a Lily stove, and it was the hardest thing (for me) to leave behind. I thought that if I could get hold of another brown Lily like Warrior's it would look lovely in my dining room, while the fireplace could be fitted - non-working - in the lounge. And I did find one; it even came off a boat. I bought it on Ebay, on impulse, while on the phone to Jim, because the price was so good. There was only one hitch - when Jim eventually got it home it turned out to be not brown at all. 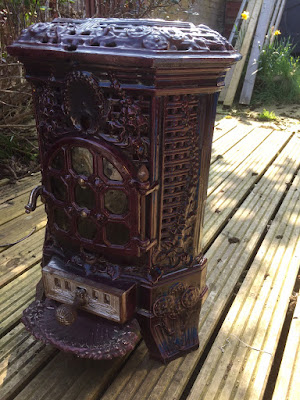 But a kind of aubergine, or not to put too fine a point on it, purple. It is however so lovely and in such excellent condition (Warrior's needed a lot of repair work) - it even has its clamshell dust tray, which Warrior's had lost before we bought it - that there was no question of not keeping it. 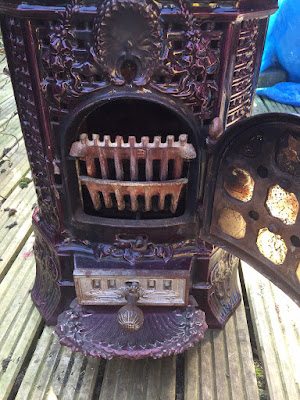 It threw my furnishing plans into disarray though. The dining room is going to be basically cream and brown, while the lounge would have a lot of red and would be the main repository for my more bohemian and hippish tendencies, mahogany and mirrors. Colour-wise, the stove would fit a lot better in the lounge, but I thought the fireplace, complete with fender and mantelpiece, might be a bit big for the dining room.

I have spent the last couple of weeks pondering this, and today I have finally made up my mind. Two things led me to decide that the stove will indeed go in the front room. Firstly, it looks as if there is a liner in the chimney which might meant that it would be possible to plumb the stove in, for an occasional smokeless fire (once I have consulted all the rules about what you can and can't do in smokeless zones); secondly, Jim took the Kango 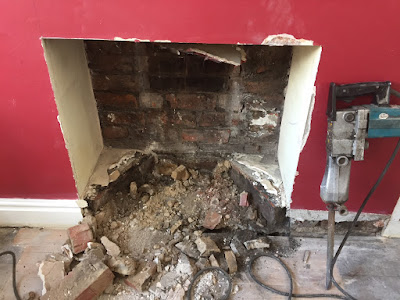 to the built up hearth this afternoon and revealed a perfectly Lily-shaped space. 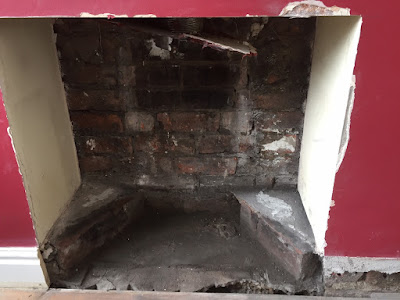 It also unearthed, battered and broken, a few Victorian tiles that must have been set into the original hearth. 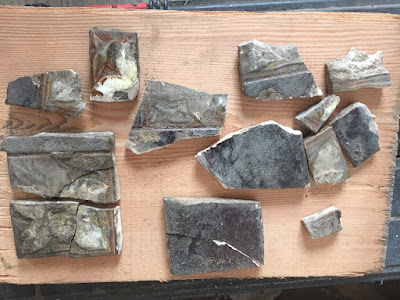 They sat in that recessed bit in the left of the photo above.