On a small southern river

But whenever I visit, I am reminded that it also has the beach, the cliffs, and the river, and these are things of beauty, in their small unassuming way. Last time I was down, I took some photos of the river in the early morning sun. 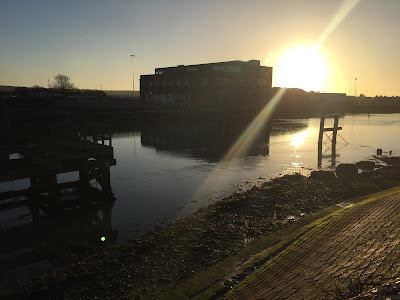 The Grade II listed former marine workshops, long empty, are now a University Technical College. The building has won awards, but sadly the construction photo gallery no longer seems to be available. However, there are these on the photographer's website. 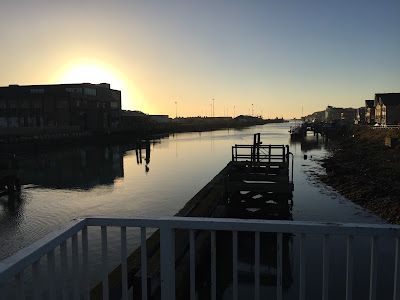 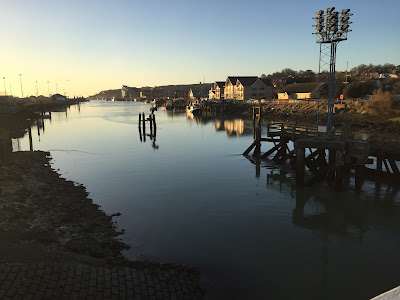 In the middle of the photo above, you can just see the semi-famous cormorant sculpture. Originally I think this was made of recycled tyres, but a new, metal, one was installed in 2012. There's a video about it here. As I may have mentioned previously, when I was on the Town Council, we had the task of naming a new block of flats built on the quayside. Someone suggested Cormorant Quays, in honour of the large seabirds that could sometimes be seen there. Murmurs of approval, then the local naturalist spoke up: 'Those aren't actually cormorants; they're black shags.' So I suggested we name the new block Black Shag Buildings.  They are now called Christchurch Court. I don't know why. 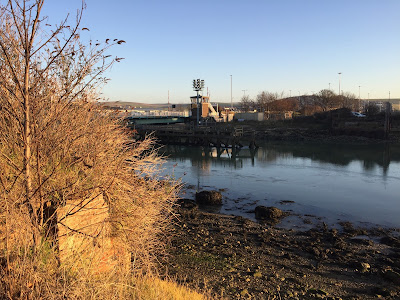 And here, looking upriver, you can see the swing bridge. This one was built in 1974, and extensively refurbished in 2015. However, from what I hear from No. 1 Son it still seems to be having problems. The 1974 bridge replaced an earlier one which also carried the gas main to the East Side of the river - this had to be disconnected whenever the bridge was opened. There are some fabulous old pictures here of the bridge and the harbour.
Posted by Sarah at 18:14