When we moved Chertsey at the beginning of December, we were worried about Ricky getting cold (in the summer we worry about him getting hot; he has neither fur not fat for insulation). Because he won't let us out of his sight, he can't just stay inside in the warm like a sensible dog.

So one of us has to sit on the back end with him and make sure he keeps his blanket on: 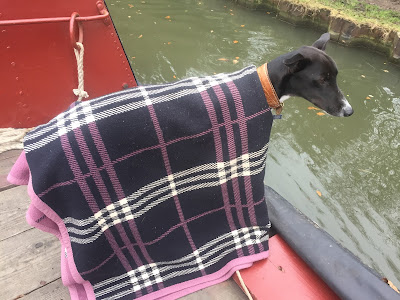 In the summer, it's a wet tea towel.

But after we got back to Alvecote last time, we met a very similar dog wearing a rather natty fleece jumper. I immediately enquired where he got it. The answer was Equafleece (the website is well worth a look, for all the canine garments you could possibly want to buy, and many you wouldn't.) I decided to get Ricky one for Christmas. As anything and everything is a surprise to Ricky, it needed to be a surprise to Jim as well. So I sent Sebastian a link to the detailed instructions on the website, and asked him to secretly measure the dog. Not too hard a task, you might think... It was only as I started to input the figures into the site's calculator that I noticed that according to him, Ricky's neck was bigger than his chest...

Eventually we must have got the right measurements, because here is Ricky in his new jumper: 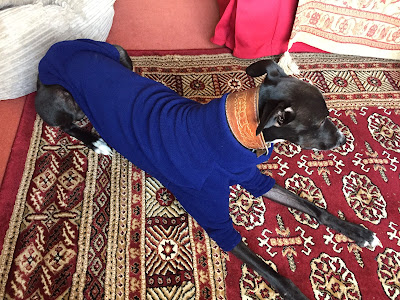 He has been quite glad of it in the recent chilly wind.  Unlike a coat, he can lie down in it comfortably, so will be able to wear it night and day if we do more winter boating - and can even have a coat on top if it's really cold.
Posted by Sarah at 20:50