She shall have music...

I was always rather envious of FMC Dove's wind-up gramophone, used to such good effect to accompany their videos of the Braunston parade, and generally create a suitable atmosphere at historic boat gatherings... I never thought I would find one for Chertsey, at least not one in working order at an affordable price. But as you can probably guess, given that I'm writing this, I did. It was in the window of the antiques shop in Penkridge, and we bought it for ninety pounds, complete with a 78 of 'Polly Perkins from Paddington Green'. 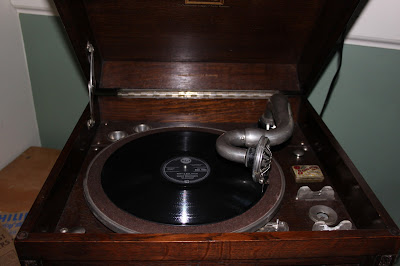 It does work remarkably well - and it's loud! with no volume control. As you can see, it doesn't have a horn - it is in fact one of the last and best wind-up gramophones made, the HMV 130 table top model (so not really intended to be portable) of which thousands were sold well into the 1930s. 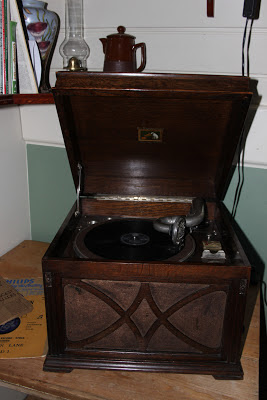 Apart from some slight damage to the mesh at the front, it's in excellent condition and seems to have been quite a bargain. Near me in Sheffield is an Age UK bookshop (of which more later) which has a massive pile of 78s for sale at £1 each. I spent a long time browsing and eventually selected four, including Winifred Attwell's Black and White Rag (familiar to my generation as the theme music to Pot Black) and Harry Belafonte singing Mary's Boy Child.  So listen out for it when we're next at a gathering!