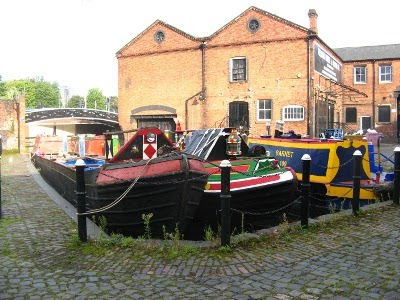 Well, that was too good to last; we got thrown out of the basin this morning when the supervisor arrived (don't worry Blossom, Minnow's still safe in there. We said we couldn't possibly move it.) Andway, we've spent the day on the towpath just beyond the basin and so far nothing dire has occurred. There are 'secure' visitor moorings on the other side of the canal; however, they are so secure that you can't actually go anywhere from them on foot, so that wasn't much good for as as we wanted to explore.

First though I got on with my painting and decorating inside the back cabin. I was doing the green moulding and it proved quite difficult and frustrating. I'm not at all happy with the result and there's still work to be done but you can at last get some idea of how it's meant to look. Then it was off into the town centre.

Based on a. the view from the ringroad, and b. the fact that it was widely reported to have been named by Lonely Planet as the fifth worst city in the world (although apparently this was a misunderstanding), I was prepared for Wolverhampton to be grim. But guess what - at least on a sunny September afternoon, it wasn't. In fact, looking at the city centre at any rate, it was really rather good. What do I look for in a town? A good range of shops, busy streets, a decent pub or two, and lovely buildings... well, Wolverhampton has all this for sure. Some stunning buildings, no doubt preserved through the fifties, sixties and seventies by poverty rather than appreciation of their Victorian/arts and crafts/thirties finery, but by and large there nonetheless. There seemed to be a fairly thriving market, most of the shops were open for business and we just had to visit this pub, the Posada, with its Victorian tiles, snob screens, booths and mahogony, and amazing curved windows. 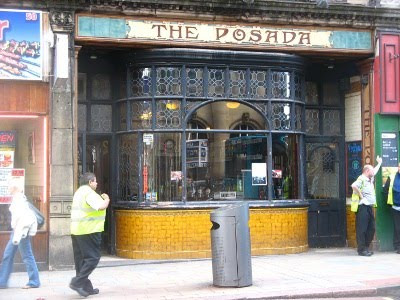 The beer was OK (I see it has had mixed reviews on BitE) but it was the surroundings that made it. And when we got back both times the boat hadn't been stolen/untied/vandalised/robbed, so we still think Wolverhampton is quite a lot better than it's cracked up to be.
Posted by Sarah at 22:19