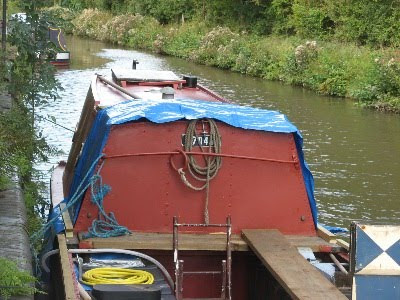 Not every day I get to give a post the title of one of my favourite songs. Anyway, the plan to cover the hold entirely in blue polythene was put, ahem, on hold. Jim did fix the batten all along the sides; the idea was to take out the mast and stands, put the planks down the middle, spread the sheeting across this, and fix it with another batten on top. The scheme foundered on the fact that it was windy and rainy and we were fed up, and also the realisation that once done there would be no way of getting from one end of the boat to the other, as although the planks would still be there, the polythene would be too slippery to walk on. So we decided instead to put our faith in the new float-switch pump, along with my cunningly designed device (not pictured, unfortunately) to prevent the downpipe depositing the entire rainfall landing on the adjacent roof directly into the hold. This consists of a strip of polythene sheeting (it's heavy duty damp proof course stuff) cable tied to the downpipe and extending down below the outlet between the hull side and the wall - hopefully sufficient to divert the flow straight into the canal.

The engine room does sport a raincoat however, attached to battens extended back from the gunnel timber over the steel gunnels. This is mainly to stop rain getting in above the hatches, which are vulnerable on both sides, having no drip (which I am assured is the proper term) above them to prevent this. This is something we are going to have to add. Most other boats seem to have them, either in wood or steel.

We are now facing the other way on the mooring. This is partly because we couldn't be bothered to wind in the marina entrance and then reverse back to the mooring, partly for a change, partly because we might want to go the other way next time, and partly for more privacy, as the other way round, Chertsey backs onto the back end of the next boat along; this way we back onto the front end of Minnow. The downside is that you have to walk along the planks to get from the bank to the cabin, and we couldn't get the back right in because it's shallow there. We might have to do a bit of dredging.
Posted by Sarah at 20:45