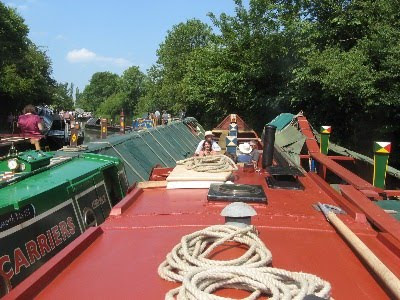 Oh dear, two posts to backdate; I really must be slipping. But a combination of the lack of signal at Braunston (no hint of the free wi-fi that the marina offered last year) with being rushed off my feet during the day and exhausted at the end of it, finally pushed blogging off the agenda. I will make up for it now though. Today we paraded for the first time, with me steering, and although it was slow and sometimes lass than graceful, we neither hit anything nor got stuck anywhere, which I count a success. Because I was on the boat I didn't get any photos, but I was later given a print by a reader, who is goung to send me an electronic version, of a really brilliant photo of Chertsey at the end of the parade, having survived the obstacle course through the marina, complete with its rather neat (even if I say so myself) chalk signwriting. So a photo of us setting off instead.

The other really notable thing about the day - and indeed the whole weekend - was how many people dropped by to see Chertsey. It was wonderful to see you all, and I'm sorry if you didn't all get the attention you deserved, it was just such a hectic day. One of the visitors was Richard Pearson, a long time friend of Richard Barnett who knew both him and the boat when Richard B. first bought it. He shared many anecdotes and it was just lovely listening to someone who knew the boat back then.
Posted by Sarah at 23:00