William George Hale was born on the 5th March 1860, to Stephen and Bethia Hale. Stephen was an agricultural worker at Worton, near Devizes in Wiltshire, and William was one of nine children.

This extract from the 1871 census shows five of them: Henry, Charlotte, William, Jabez and Arthur. Ezra, who would have been 21, was presumably living elsewhere. Elizabeth, Mary and Alice had all died in 1868 - Elizabeth aged 14 and Mary aged 11 from consumption, and Alice, aged five, from 'marasmus' - severe malnutrition. Malnutrition of course probably contributed to the deaths of the other two girls as well.

The following year, William and one of his brothers - presumably Henry, who up to that point had been an agricultural worker like his father - walked the twenty-two miles to Swindon to get jobs on the railway.

William was indentured, at the age of twelve and three-quarters, as an apprentice boilermaker.

These rather poor photocopies are from the Great Western Railway Loco and Carriage Dept Register of Apprentices' Indentures. Unlike some (who 'absconded' or were transferred elsewhere), William served his full seven year apprenticeship, seeing his daily wage rise from 10d in the first year to a respectable 3 shillings in the seventh - more, no doubt, than his parents could have dreamed of.

Having completed his apprenticeship in Swindon, somehow William ended up living in South London, married at twenty (in 1880) to a woman eight years his senior. Before long, however, he was back in Swindon, as the 1901 census shows:

- he and/or Annie still lying about their relative ages as they did when they got married - and working as a 'Rivetter (Iron) G.W.R.' Someone - possibly my father - has added 'boiler' above this. Son George (George William, or William George Stephen - take your pick, but he was known as George) was at that point, aged fourteen, working as a grocer's assistant.

But by 1911, he was a 'plateworker' in the Swindon works, while his father, by now aged fifty-one, and with only another eleven years to live, was working as a frame builder in the wagon department. I guess boilermaking is a young man's game. 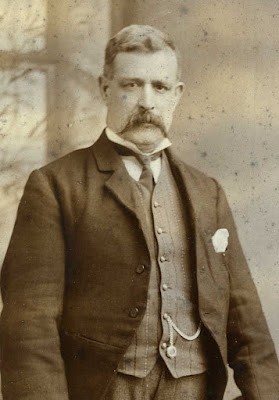 I don't have a date for this photo, but this is William in his Sunday best.

George, meanwhile, carried on working for GWR and in or around 1915 (family legend has it) was on a works trip to Jersey when he met one Irma LeLuan, a woman of his own not very tender age of thirty. Undeterred by the fact that she spoke no English, but only Jersey French, they married in 1916 and settled in Swindon, where she lived until her death in 1985 at the age of 99. That's my Grandma, and the only one of the characters in this story so far that I met. 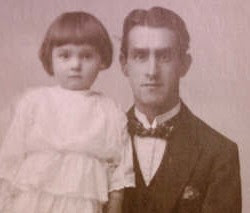 Here's George in around 1921, with Auntie Doreen 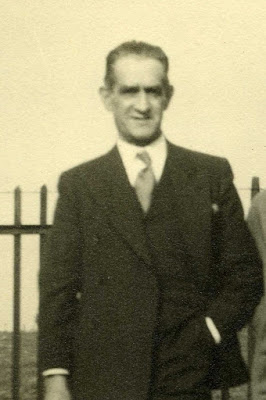 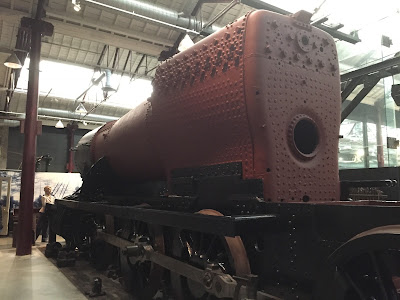 Hence my interest in the boilermaking shop at the museum. Although both William and George may have spent much - even most - of their working lives in other jobs at the GWR Swindon Works, it seems pretty clear that they were both, at one time or another, boilermakers - a dirty, dangerous, high-pressured (no pun intended), highly-skilled and above all, deafening, job - and that's something I'm quite proud of. 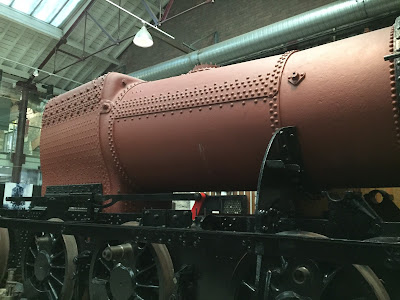 It may of course also explain my love of rivets.
Posted by Sarah at 06:00