A couple of weeks ago, Sebastian and Izzi finally came to visit me in Sheffield, and become the latest guests to test out my £40-from-Oxfam and extremely heavy and therefore obviously good sofa bed. They pronounced it very comfortable and I can vouch for the fact that it is very convenient.

The pretext for them coming at this particular juncture was to attend the Full English concert at Firth Hall (part of the University). The Full English project involves creating a searchable digital archive of a vast number of previously scattered English (and beyond) folk music manuscript collections, freely available on the web for anyone to access. Part funded by a heritage lottery grant, it was coordinated by University of Sheffield academic Fay Hield, who is also a singer (whose records I like a lot).

The Full English band comprised (let me see if I can remember) Fay Hield, Martin Simpson, Nancy Kerr, Seth Lakeman, Sam Sweeney,  Rob Halbron and Ben Nicholls. That's a lot of folk fame in one small hall. The music was great, and enhanced by brief descriptions of some of the collectors (Apparently Percy Grainger loved his mum so much that he took a bunch of birch twigs with him on his honeymoon so that he could beat himself for having diverted his affections elsewhere.) and video screens showing archive photos and facsimiles of the manuscripts. At one point some cine footage of Maud and Helen Karpeles wearing oversized gymslips along with a male collector whose name eludes me but who was universally acknowledged not to be a natural, demonstrating some traditional dances. With handkerchiefs. There must have been 200 people in Firth Hall, and not a single one of them dared laugh. 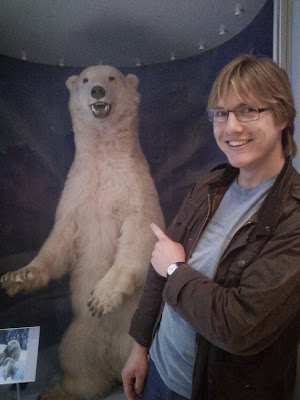 The following day I took Sebastian for a special treat. As a child he was a great collector of polar bears - cuddly ones, model ones, books, pictures, ornaments, sculptures - you name it, if it was a polar bear, he collected it. But I don't believe he'd ever seen a real one. So I took him to Weston Park Museum to see the famous Snowy. Well, a real live one might have been asking a bit much, but a real dead stuffed one's the next best thing, and a lot more amenable to posing for photos.
Posted by Sarah at 16:21