Ally, the owner of Birmingham, has sent me this photo of Bakewell and Birmingham paired together for Union Canal Carriers in 1979. It was taken by Lin Rose, in Gas Street Basin. Apparently Birmingham was usually paired with Balham, which was at this time assisting with repairs to Braunston tunnel. 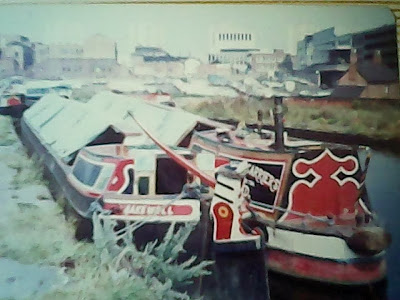 I like the way it looks like one of the artful digital creations that Nick posts in his reflections series - but actually its the result of photographing an old Instamatic print with a phone camera.

Thank you very much Ally and Lin.
Posted by Sarah at 09:58