Down to the river

That should be 'up and down' really. I could just go down to a river, to the Don, but that's not a very picturesque route, nor indeed bit of the river. But I have now found a route to the Rivelin which is not as hilly as my previous one, and is only just over a mile and a quarter, so I aim to make this a regular walk.

When I first set out on Wednesday, it was pretty much the first time I'd left home in four months, total avoidance being my coping strategy of choice. And I wasn't missing people, or shops, or indeed nature, or the great outdoors (as opposed to the small outdoors of my garden), but I really, really felt that I needed the exercise, and that's what drove me out, early in the morning before anyone else was around.

It's impossible to imagine now, but the lower Rivelin Valley was - in terms of the use of water power -  once one of the most heavily industrialised stretches of river in the country, with twenty watermills in a three mile length, the first built in 1581, and the last still operating in the 1950s. 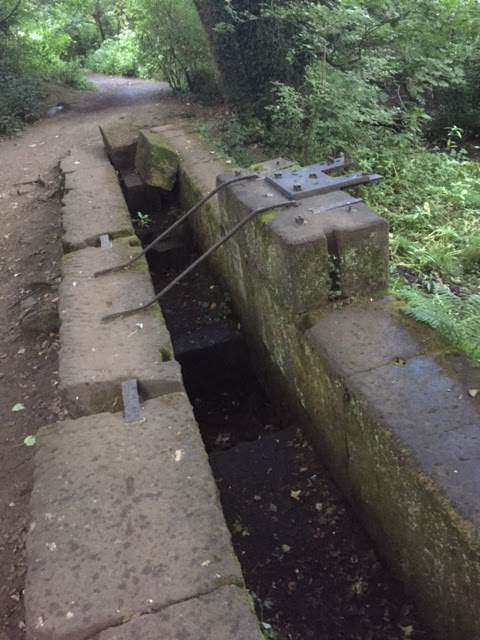 This is (if I have identified it correctly) the remains of the overflow weir at Mousehole Forge, which was still making anvils in the 1930s. The waterwheel was used to drive air into the forge.