The age of the train 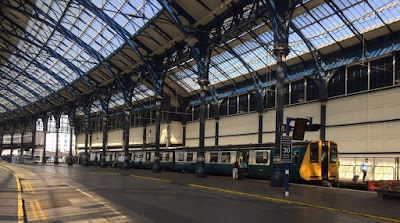 I unexpectedly had an exciting little travel adventure on Sunday. When I'd arrived on Thursday evening, I'd been intrigued to see this train at Brighton station, and when I left Newhaven on Sunday, it was the 1438, so I got to ride on it. 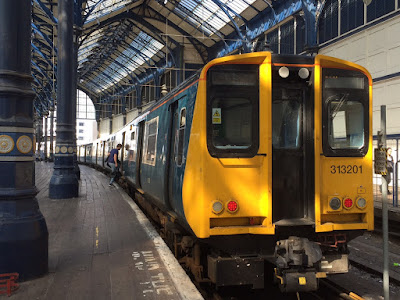 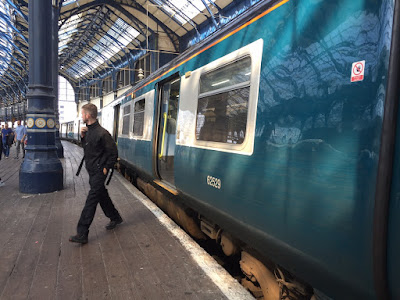 What first caught my eye of course is that's painted in facsimile BR livery. This was done a couple of years ago in honour of its status as the first 313, and when it finally is retired, it's off to the National Railway Museum at York. Southern bought up a number of these trains in 2010 to run on the lines along the coast east and west of Brighton, freeing up their newer rolling stock for longer-distance routes. I recall it being quite controversial at the time, as the 313s were seen as old and tatty, and (shock horror) have no toilets. I've probably ridden on 313201 many times when I lived in Newhaven, but never previously knowingly.

Once I got to Brighton, I changed onto the Thameslink. Now Thameslink used to have really scungy trains, but now they have shiny new and very swish class 700 Siemens Desiro City trains, which they introduced between 2015 and 2018, so I reckon they must be among the newest on the network. And I'm pretty sure Brighton is the only place they'd intersect.

I was a bit disappointed to find that my train to Sheffield from St Pancras wasn't one of the slam door and sea toilet HSTs that often seem(ed) to run on a Sunday. They have such comfy (if somewhat saggy) seats. Also, it's amusing watching the young people not knowing how to get out.

I am horribly afraid that I have started down the road track that leads to being a trainspotter. I have nothing against trainspotters; indeed, I am in awe of them. But it must be so time-consuming. And I haven't even spotted all the Grand Union large motor boats yet.
Posted by Sarah at 20:38