When Jim got Geoffrey, we had no idea how he would feel about the boat. Jim was very concerned that he'd be freaked out by Alvecote's narrow pontoons. The Alvecote weekend was a good opportunity to see how he managed the boat - but with the added concern of how would he manage all the people. 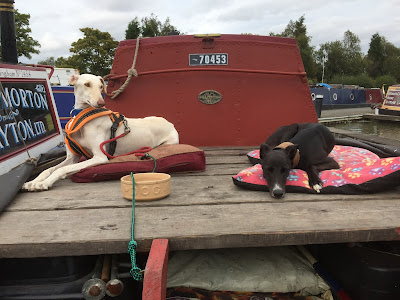 Well, he did absolutely brilliantly, on both counts. The only problem was keeping him on the boat and not constantly running along the pontoon to see people. He turned out to be a worse tart for attention than even Ricky (and with the advantage of being a more convenient height for head rubbing without needing to bend down). And everybody loved Geoffrey - but I kept giving Ricky special loves so he wouldn't feel left out. Geoffrey was more confident on the pontoon than Ricky - who is actually quite reluctant on the long pontoon, when there's not a boat either side. Geoffrey is certainly a quick learner, as the breed is reputed to be.

Since he has been back in Newhaven we have learnt another thing about Geoffrey which is both reassuring and worrying - he loves the water and is a strong swimmer. Reassuring that he can swim, if he were to fall in - but worrying in that fear of the water is the only thing that keeps Ricky on the boat when we're going along. It looks horribly as though Geoffrey may need to be physically restrained.

The one thing we didn't try last weekend was starting the engine while Geoffrey was on the boat. Plenty of other people's were running though and he was completely unfazed. 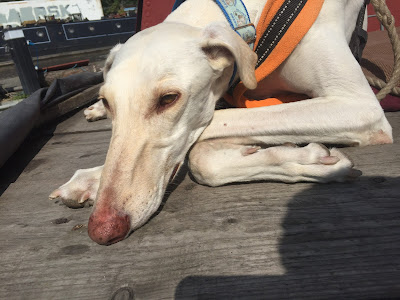