And then off to the seaside

This is a bit of a post for Starcross Jim. It has rail routes, refunds, and Herefordshire.

A few weeks ago I agreed to go to Swansea to act an an 'external expert' for the validation of a new Foundation Year. Then as the time got nearer, and I contemplated the five hour train journey and hotel stay, I wished I hadn't.

But then last week I went, and I was glad I did.

I spent most of the journey there immersed in the validation paperwork, coming up with what turned out to be sensible questions about it, and realised that I really am, well, a bit of an expert on the programme design and quality assurance side of Foundation Years (and learning more all the time).

And I discovered something - and discovered something about the National Rail website in the process. I discovered that I didn't have to go via Brimingham and/or Bristol. I discovered that I could go via Stockport. Not only does this avoid New Street station (a boon if ever there was one) but it's cheaper. When I was up and down to my mother's place in Newport, the National Rail website never told me that this route existed, even though the train stops at Newport. It only offered the trains that terminated at Cardiff (where my via Stockport train also stopped). 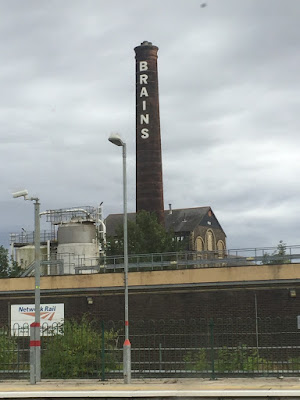 I've just checked, and it still doesn't show the Milford Haven train that I caught. OK, it takes a bit longer, meandering through Shropshire and Herefordshire, but as I say it's cheaper, and you don't have to worry about whether the races are on at Cheltenham (I've somehow managed to go that way on Gold Cup day twice. Horrendous).

So I had a pleasant journey there and discovered that the University had booked me into a hotel in Mumbles. I used to hate staying in hotels - the strangeness of it - but a very strange thing completely changed my feelings about it. It was Bill Bryson, in one of his travel books, writing that whenever he arrived in a hotel, the first thing he did was run a bath and empty all the individual bottles/sachets etc into it, on the basis that they're all the same. And although I didn't do that (there wasn't a bath, for a start, but I brought the little bottles home), that thought has completely changed the way I view staying in a hotel. 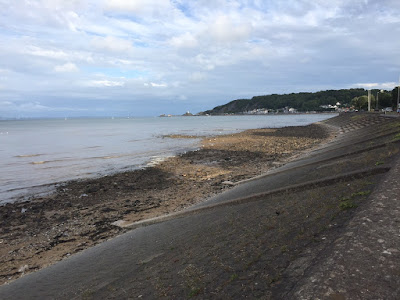 Anyway it was a nice room (although the shower was very feeble - say what you like about south west (or more west now) Sheffield, but, excellent water pressure - and before dinner I went for a brisk stroll along the prom one way, and after dinner I went the other. In between I had an excellent meal and even a glass of wine, which I have yet to learn whether Swansea will pay for. 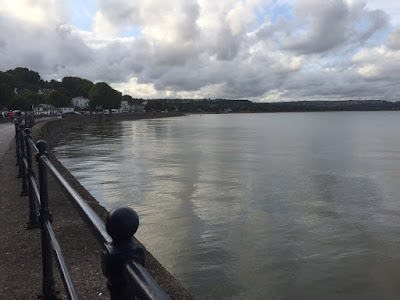 The next day, after an excellent breakfast (I have also solved the problem of what to do with a hotel buffet breakfast - I make myself a toast bacon sandwich) I was whisked away by taxi to the University - to a building that was surprisingly run down compared to the majority of places I've been to lately in England which are seemingly always in the throes of building and refurbishment. Anyway, I quite liked the grubby paint and worn lino. I then met a splendid young chap called Phil, who is 'passionate about curriculum and assessment design' so we were bound to get on. We bonded over the unsung virtues of QA processes. Then I got to ask my intelligent questions, we had a coffee and a chat about the class politics of Foundation Years, and then it was another cab to the station and a smooth journey back, marred only by the fact that I didn't have a book and my iPad battery had run out.

And talking of trains - as we were - I received a full refund last week from North Western Trains (or whatever the shoddily rebadged London Midland fleet are now called. What happened? I loved London Midland) for my 65 minute delayed train from Rugby to Sheffield via Tamworth. However, they couldn't do it entirely gracefully - I got a shirty email saying that they would grudgingly pay out this time despite the fact that I hadn't defaced my ticket in the photo of it that I sent them. What do they think I'm going to do with a ticket that's only valid on the day of issue anyway? But maybe I shouldn't moan too much as I've just noticed that they've refunded the cost of the entire return ticket even though I made the return journey without a hitch. Or at least they say they have - I haven't checked the bank statement yet.
Posted by Sarah at 20:24