On Monday we were up early and waiting at the bottom of the Foxton locks at five to eight. As it turned out, there was no competition - there's been surprisingly little traffic over all this trip - but I suppose it's early in the season yet. We didn't start up the locks until 8:30, but were finished in the advertised 45 minutes and celebrated with an ice cream (me) and a bacon cob (Jim/Ricky) at the top. Sadly there is no photographic evidence of me tying up the boat with one hand whilst holding a large and precarious cornet in the other, but I assure you, my talents multiply by the day. It was a much cooler, overcast day, and we sailed serenely through the green green world to tie up at the top of Watford locks just after five. 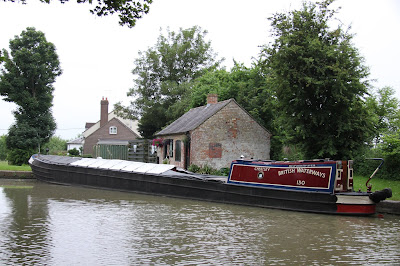 Watford has an amazing book swap. I took about ten books over, and came back with as many, that I really wanted to read (rather than 'that'll do if I'm desperate'). After the lock keeper had gone for the night we pretended that their little cottage and garden was our very own, although Ricky had to be confined to the boat to stop him digging up their lawn.

In another 45 minutes (starting at 8:35) we were down Watford and on the last leg of the journey to Braunston. I was pleased to note that we beat CanalPlan's estimate - on default settings - by eleven minutes. We tied up by the ladder bridge, but were a bit perturbed that the mooring suspension for the show only starts a week in advance - I'd expected a fortnight, so thought we'd get away with plotting up there.

Pete came to the rescue though (again) and offered us the use of Renfrew's mooring, while he prepared Renfrew for the show. The offer was made over dinner at the Boat House - definitely my second choice Braunston pub, but the Nelson, it transpires, don't do food on Monday OR Tuesday :-(
The trouble with the Boat House is that it's not dog-friendly (you wouldn't think it would be hard, a place that size) so we had to sit outside. Despite the afternoon having warmed up, we anticipated the evening becoming chilly again, so Jim brought two jackets, which he put down on the bench beside him, and we brought Ricky's jumper (that he'd been wearing all morning) as well as his fleecy bed. Ricky decided that the bed alone wasn't wholly to his satisfaction, and that he could do better for himself: 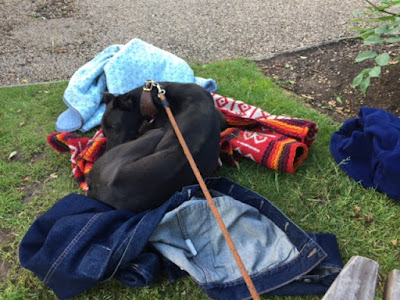 Jim was so engrossed in conversation he didn't notice his garments being purloined and repurposed.

On the way to the Boat House last night, we met Kevin and Vicky, former Star- and then Harry- Man and Woman, who have a new boat. So this morning, after moving Chertsey down to the turn we went and had a cup of tea with them, before finally setting off in the car to Alvecote.

And so ended a fairly uneventfula nd very enjoyable holiday. The weather has been brilliant throughout, wioth lots of sun, and only the occasional rain - and never while we were boating. The do at Langley Mill was great; I actually enjoyed the Soar (and of course the Erewash, but that's not so newsworthy) and we had a lovely sociable time - all the better for boing unplanned - on arrival in Braunston too.

Back to work for me now, until the weekend of the show.
Posted by Sarah at 20:28